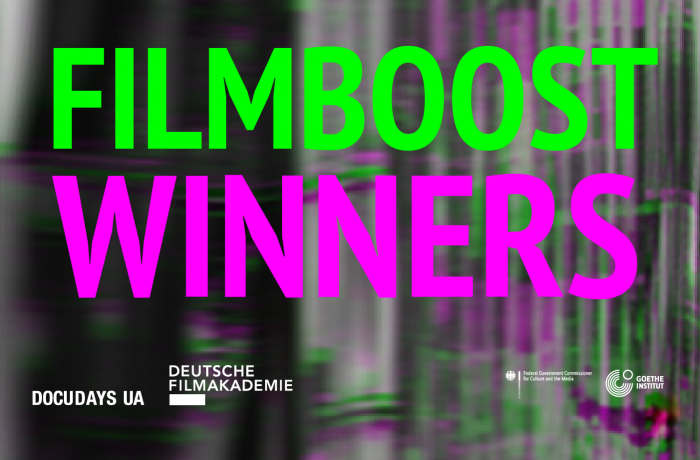 This summer, we launched a scholarship programme with the Deutsche Filmakademie e.V. within the DOCU/HELP support initiative for cinematographers. In a month, an independent international jury processed more than 400 applications with projects of various genres and formats. We are grateful to all applicants and are pleased to announce FILMBOOST scholarship holders.

Each finalist will receive €5,000 euros between September 15 and December 31 of the current year, inclusive. The scholarship will help to create the author's artistic expressions that reflect on the events of the war and its consequences, as well as the Ukrainian reality at the political, social, economic, legal, and personal levels.

Meet the finalists of the FILMBOOST scholarship programme:

Mykhailo Volkov. On the search of the Pokémon / У пошуках покемона.

Igor Savychenko. I do not remember this war.

The award from Irish Filmmakers supporting Filmmakers with the support of Element Pictures & Screen Directors Guild of Ireland – €2,000 and the services of the Irish post-production company Outer Limits for a week of post-production – was given to the short documentary project 81 by Li Biletska.

The selection process and results are commented on by the programme partners, the project's international jury, and the head of the DOCU/PRO industry platform.

All of us at the German Film Academy are so happy to have managed to set up this scholarship programme at such short notice and to organise funding for the continuation of these 60 really impressive film projects. We also wanted FILMBOOST to be a sign of solidarity with our Ukrainian colleagues. Film culture is essential for the identity of the people in Ukraine and a sign for the people in Europe and the world. We are pleased about the jury's decision and look forward to getting in touch with the scholarship holders and accompanying their exciting and important projects.

Daria Badior, a freelance critic, editor, and journalist from Ukraine:

First of all, I am very grateful to be a part of it; thank you for inviting me as an expert.

I am tremendously happy that I could have a glimpse of various film projects that Ukrainian filmmakers are working on. So many of them promise exciting films and developments both for their creators and the audience. I wish them good luck, and I look forward to watching them on a screen.

As for the procedures, I am glad that Docudays UA did it, as the festival's team knows how to tangle extremely difficult tasks, and also they have the trust of the Ukrainian film community. However, I would suggest thinking about making the requirements of the reference and recommendation letters more strict. It was almost common when a designated producer or partner on the applying project wrote the recommendation letter for the applicant. There is a bit of a conflict of interest here.

But all in all, I think it was an important experience for everyone involved! Thank you once again for inviting me.

I was happy to be a member of the FILMBOOST jury. After reviewing 179 applications of our filmmakers over the period of work, I can confidently say there is Ukrainian cinema, and it will be! Wars and crises are always an impetus to creativity and development. I would like our country to avoid such a fate, and our cinematography could develop in its own peaceful way. But life has turned out differently, and programmes like FiLMBOOST are vital for the film industry to continue to exist and for the stories that were born in these months to be realized.

Julia Kovalenko, is a film critic and programmer at Docudays UA IHRDFF in Kyiv:

There probably could be an inspiring text about how difficult it was sometimes to choose winners from so many exciting ideas and competitive efforts and how each choice ended up not being a compromise but a sincere decision, which would be pure truth. However, I believe that, instead of my text, the films themselves will soon testify to this. Instead, I want to use this opportunity to thank all the applicants for the fact that their works have given me the opportunity to feel my/our not-aloneness. Recognizable stories and feelings, similar experiences and motivations, and difficult decisions that many of us had to make with pain during the last six months amidst burnout over the last eight years. In the end, all received applications form a certain portrait of a country in which people from the western to the eastern borders, from the north to the south, experience similar problems and joys, sorrows and successes, and have common values ​​and discourses. This precious unity and non-loneliness give sincere optimism in spite of everything. See you at the Ukrainian film screenings!

It has been an honour to participate as a jury representative for this great initiative. I have been familiar with many great Ukrainian projects from the past years, nevertheless, I was truly impressed by the abundance, diversity, and by the very strong quality of the submitted projects, and not least, by the resilience of the filmmaking community, willing to bring strong Ukrainian content to life and to the world, despite the incredibly harsh conditions of creation during the war. I only wish we were able to support all filmmakers in this endeavour, as the need for support is evident in each and every case.

I was utterly surprised to see such a wide range of ideas covering practically all possible film genres and scales of production: from DIY short documentaries to big-budget TV series; from intimate personal stories to ambitious universal narratives... Surely, the large-scale Russian invasion has crippled the Ukrainian filmmaking industry for the time being, but it also made our creative potential more focused, direct, and even immediate.

Of course, it was challenging for the jury to pick only 60 projects to support. Yet, it's also somehow inspiring to know that there's so much more potential left waiting for another Filmboost or a similar program. Which, I'm sure, the wonderful Docudays UA team is already eager to organize.

It seems that Ukrainian cinema always exists despite, not thanks to. As history shows, every economic, and political crisis equals one lost generation of filmmakers. In February and March, it seemed that the young generation of Ukrainian filmmakers would become another lost generation. But now, there is hope that this time history will be different. The unprecedented support of foreign partners, for which I am infinitely grateful, proves, in my opinion, that Ukrainian cinema has already taken a certain important position on the international market. And this is the result of our work with you. Let's not stop.

Soon, we will tell in detail about each winning project on the official pages and introduce the programme participants. Stay tuned for updates and cheer for the development of the Ukrainian film industry.

FILMBOOST is created by NGO Docudays and Deutsche Filmakademie e.V. with the support of the Federal Government Commissioner for Culture and the Media and Goethe Institut.