Docudays UA at Izolyatsia in Donetsk 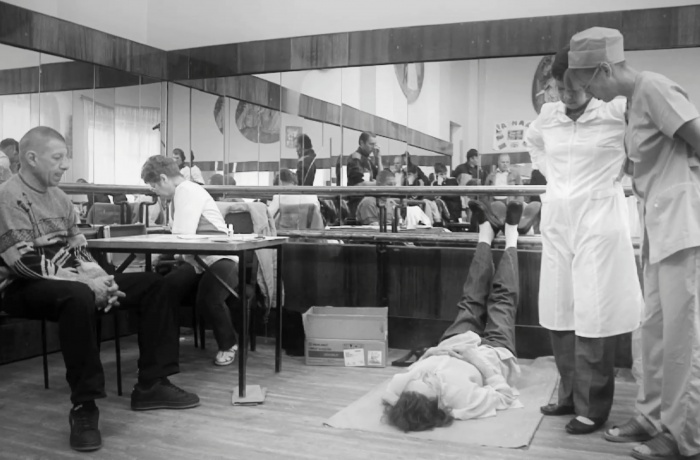 Entrance to all Docudays UA screenings are free of charge.

In Donetsk, at the industrial premises where previously insulating materials were produced, Docudays UA welcomes the viewers to watch 4 films from this year’s festival selection: The Coal Miner’s Day, Blood, Crepuscule, and The Last Limousine which has won this year’s Docudays UA and the director of which, Daria Khlestkina, symbolically took to Moscow this year’s award – a piece of Maidan cobblestone.

These films reflect on different topics and all of them tell us about interesting aspects of post-Soviet reality – all of are made in countries of former socialist block.

The Coal Miner’s Day (2013, France, 80’, Dir. Gaël Mocaër)A carnival-like ceremony in an obsolete and entertaining Soviet style takes place in the Ukrainian countryside. Then, all of a sudden, into the mine explodes the violence of a prison world where everyone finds refuge behind a license, as a talisman that enables them to survive the chaos. The camera takes a dive into the bowels of the earth that devours its own children; at the same time she feeds, warms them up, enlightens them all. This is a skimpy, sweltering, airless, lightless, spaceless world, invaded with metal, dust, crawling and bowed men. A party and a few balloons make a break in these men’s life. Do they really breathe better outside?

Blood (2013, Russia, 62’, Dir. Alina Rudnickaya)The colorless footage shows needles biting into white flesh and black blood running down transparent tubes... A mobile blood transfusion lab – an old van with a team of medics and equipment – travels through provincial Russian towns and villages gathering donor blood. Those donors come from various social and age groups. They are countless, but not due to their philanthropic views – they’re driven merely by the desire to make some money, a half-liter of blood costing 850 rubles. This is small change, but it is essential for the unemployed, or those who earn less than 3000 rubles a month. Nevertheless, their blood may save someone’s life if it’s not flawed – infected with HIV, hepatitis, or tuberculosis.

Crepuscule (2014, Ukraine, 61’, Dir. Valentyn Vasyanovych)Maria, aged 82, and her sick son Sashko live out their days in a remote province. Sashko went blind because of serious illness. He’s afraid that his mother is dying, but Maria desperately clings to life as she realizes that no one will take care of her son. They may seem to be acting irrationally, but they are heroically unwilling to surrender. Maria buys a calf, Sashko starts to build a tractor, groping his way in the darkness…

The Last Limousine (2014, Russia, 73’, Dir. Daria Khlestkina)Faced with the relentless demise of the factory they work at, Mikhail, Andrey, Nina, Vladimir, Nadia and Luda – bosses, foremen, engineers and workers at the giant Moscow automobile plant ZIL – cling to their established routines and professional pride to stay upright in a world which is crumbling around them. When an order comes in to produce three of the factory’s legendary hand-made limousines, once the centerpiece of Soviet military parades on Moscow’s Red Square, Mikhail’s team of hand-picked specialists throws itself at the opportunity to show what they are worth.