The ambivalence of modernity and possibilities for synchronization 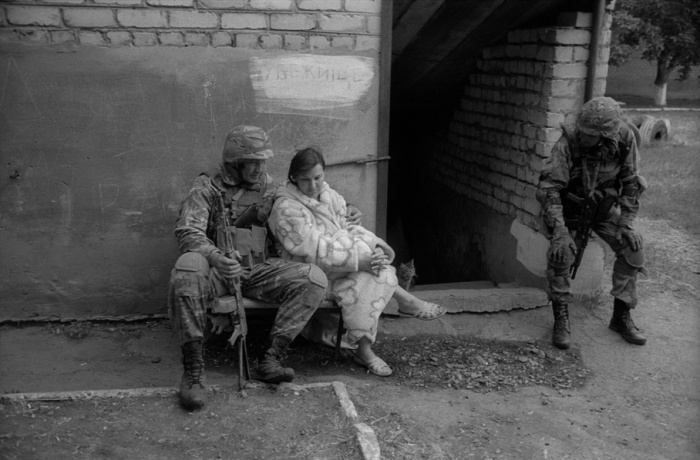 This September Hamburg will be the fourth stop on the See Ukraine European tour by Docudays UA, which started in Paris. The project’s aim is to share Ukrainian documentaries that present today’s Ukrainian reality to Western Europeans and contributes to cultural dialogue between countries. We talk about Euromaidan, about the information war prosecuted by Russia against Ukraine, about Ukrainian human rights activists fighting for political prisoners, and about the unique volunteer movement uniting Ukrainians for a third year. We don’t pull our punches, and want Ukraine to be seen as it is. And we face the same question at every stop: how do you talk about a country where war has become part of everyday life? Iryna Klymenko, See Ukraine coordinator in Germany, shares her experience of organizing the project in Hamburg.

Modernity has imparted upon Europeans the unprecedented belief that mutual understanding can always be achieved, that the strongest arguments can prevail, and that opportunities indeed exist to listen and be heard. At the same time, the history of modernity itself became one of defeats in our attempts to leave brutal conflicts in the past and forge common ground for peaceful co-existence. This ambivalence shows us that the world isn’t simple, and that you can’t always find unambiguous answers and universal explanations to difficult questions. But it also urges us to not stop trying.

The iron curtain divided Europe for a long time, and it will be a long time still before those borders permanently disappear. It will possibly take longer still for the curtains in our minds to open. The historical experience of each society, each individual set of collective memories, has produced and implanted different forms that shape the fundament for our respective perceptions and understanding.

We know stories from the Soviet era, when intellectuals and dissidents who managed to escape to the West faced suspicion about their stories of inhumane repression and torture. While it would seem that, when it comes to freedom, dignity and human rights, there can be no disagreement, there shouldn’t be two opinions or interpretations. But is it really so unambiguous?

Ironically, difficulties in understanding arise precisely where there is the good will to put aside simplistic answers, crude theories and preconceptions, and a desire to see yourself through the gaze of the other. Here, black and white washes out into uneasy greys, leaving questions whose answers are not always those wished for. And we are left forced to search such forms for mutual understanding which are even capable of momentary synchronizing experiences that are radically different in both their nature and content. 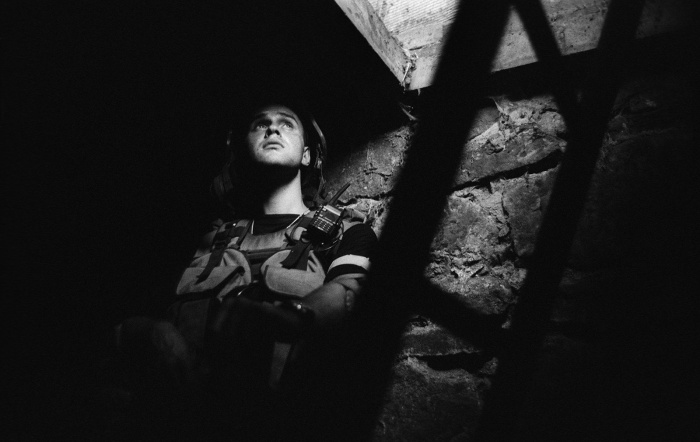 Photo from the series “You See, My Brother?” by Oleksandr Glyadelov

The preparations in Germany for the exhibit by Aleksandr Glyadyelov involved, among other things, regular correspondence to translate the presentation of the works and author. It was important to find such wording as would convey their meaning to a German audience without losing the original sense. The process of translation unexpectedly confronts us with new understandings of things usually left unquestioned.

For example, it is unusual to refer to photographers in German as “authors”, as this term is usually associated with writers. The choice of the term “author” signifies a departure from an unambiguous understanding: is this a misprint, a mistranslation, or an attempt to convey some meaning? Is this a photographer telling a story? 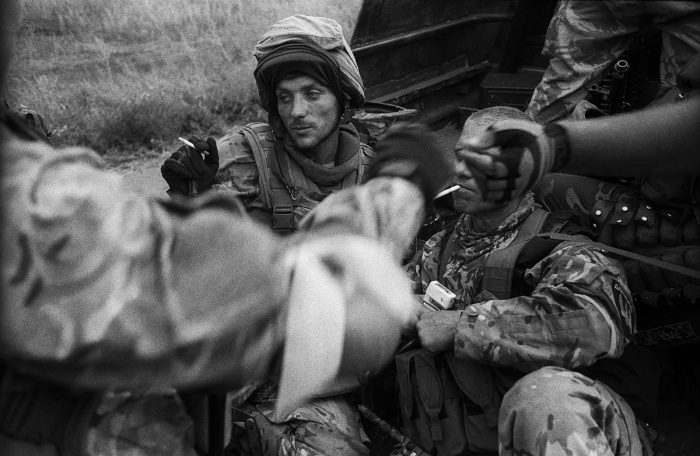 Photo from the series “You See, My Brother?” by Oleksandr Glyadelov

This ambiguity of translation became an advantage because it opened spaces for the reassignment of meaning. We can separate the “author” from the photograph, who is telling us a story of something difficult to convey in words, needing instead artistic forms of expression, with all their (in)ambiguity, to address such ambiguity in life itself, life in conditions of war. The language of art, which speaks to different aspects of our perception, may become a form able to momentary succeed at lowering barriers to understanding.

The Mahnmal St. Nikolai memorial holds a central place of memory for the victims of war and violence between 1939-1945 in Hamburg. This former church in the city center was destroyed in 1943 during the bombing of Hamburg. It was left in ruins to act as a constant reminder of the causes and consequences of war in Europe, this well known and crucial “never again”. Today it hosts a permanent exhibit of black and white photographs of wartime, “Gomorrah 1943: Destruction of Hamburg During the Bombing.” Its purpose – reminding us of the importance, even after decades of peace, of not stopping to consider what the everyday experience of war is like, then and now. 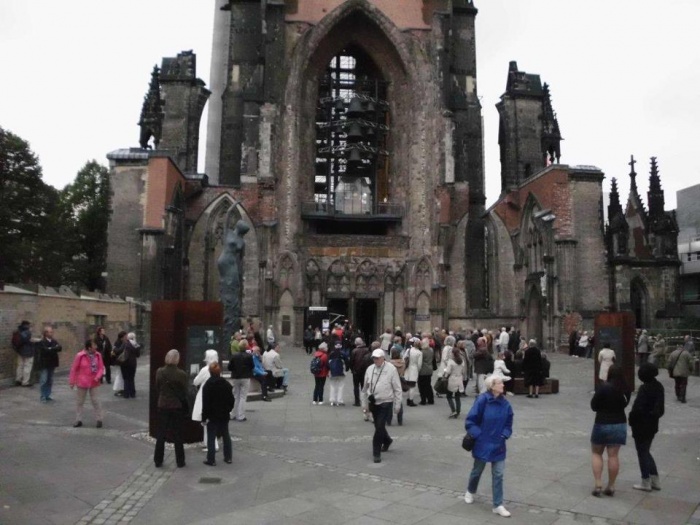 Memorial Mahnmal St. Nikolai (A space where will show an exhibition of photographs by Oleksandr Glyadelov. Photo: facebook.com/st.nikolai)

How to speak of war? How to speak of war in Europe? How to speak of war in a Europe that is rightly proud of its recent history of peace? This question is posed not only by us, who directly experience war today. This question is also posed by those lucky enough not to face the horrors of war in their own daily lives. Yet, although the questions are the same, they arise in different societies with different historical and personal contexts. This asynchronicity of experience can be an obstacle to understanding, but it doesn’t have to, if we manage to pause to also consider the asynchronicity itself.

Glyadyelov’s exhibition of black and white photography, which tells the recent history of Ukraine, from Maidan to the war, will be presented in one of the halls of the Mahnmal St. Nikolai memorial. There is just one wall between Glyadyelov’s work and the permanent exhibition of pictures of Hamburg after the bombing of 1943, which changed the lives of every family in this city. I hope and believe that this proximity will enable what even the sincerest words can fail to do: metaphorically and aesthetically synchronizing separate experiences to allow mutual understanding, if even for one critically important moment.

On photo - one of the photos from the series "Hey, brother?" Alexander Glyadelov. The soldiers of Battalion "Donbass" went into Ilovaysk and communicate with the local women, who came to meet them from the repository. August 18, 2014.