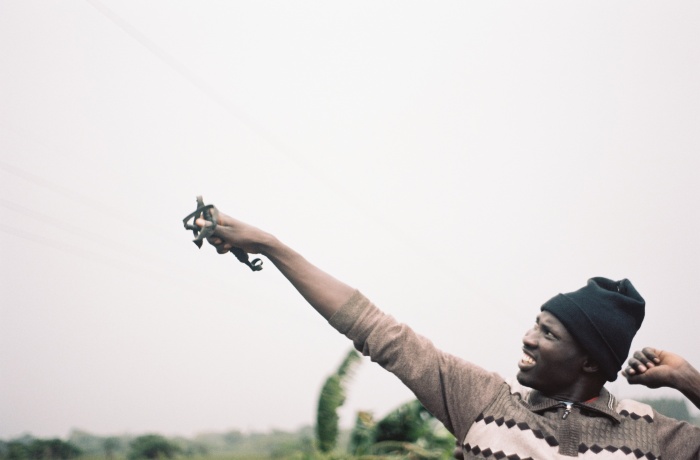 Docudays UA will be presenting a film by the author of the controversial novel The Kindly Ones, Jonathan Littell, entitled Wrong Elements, which is about war crimes in Uganda. The characters in this film (Mike, Geofrey, Nighty) are former soldiers from the anti-government movement, the Lord’s Resistance Army, who were kidnapped as teenagers and are now trying to live a new life. This is a film about how a person can be both a victim and a murderer, the ‘wrong element’ in the society.

Did you consciously make your film similar to Joshua Oppenheimer’s The Act of Killing and The Look of Silence, in which the Indonesian torturers talk about their acts of murder?

Yes, this is a method invented not even by Oppenheimer, but by Claude Lanzmann in the film Shoah, in which former Nazis talked about their crimes. This is the method of reconstruction that Oppenheimer and I used later.

Judging from your novel The Kindly Ones you studied not only the people of Africa, but also the psychology of the Nazis, who were doing the same things – killing people. What do you think are the similarities and differences between Africans and Europeans in their attitude towards murder?

I am inclined to think that people are the same everywhere, regardless of the colour of their skin. Perhaps they have a different attitude to the very fact of death. The taboo of death or the fear of murder are universal for everybody.

How does your film deal with the ethnographic element – the intersection of the world of spirits and the real world?

The Acholi (an ethnic group living in northern Uganda – ed.) really believe in spirits. I wanted to show that these people are often seen as sectarian, crazy. That is absolutely not the case – this is their religion. But there is something in the structure of the film that I wanted to explain. The Acholi see the world divided into two spaces. ‘Gang’ is everything that is man-made, and ‘lum’ is nature, everything that is not controlled by man. And the relationships between these spaces are in a constant struggle. For example, the trees have to be cut or trimmed. In the film we are constantly moving from one space to another. Also, for example, there is a scene where the ritual dances take place on the territory of gang, and before the heroine can be enveloped by all the spirits, it goes into lum. It is important that all spirits remain there, in the wild.

How did you choose your heroes?

First of all, before we began filming, I developed a very detailed plan, a rigorous analysis – I was well prepared and knew in advance what kinds of people I needed. Women, men who returned to service, civilians. Also, I was also interested in mototaxi drivers because I knew that some very interesting former rebels were doing it. I just searched for these people through various channels – the scientists helped me. It wasn’t casting per se; I just chose those who fit my criteria. Geofrey awed me immediately. We filmed for the whole year, but we weren’t staying there the whole time. We went back and forth. Geofrey and I have a very trusting relationship, and we continue to chat via Skype.

In the film we see this cycle of the victims becoming the perpetrators. Do you see a way out of this situation? How do we end the war in Uganda?

This is the question I raise with this film. It is clear that some people can change their behaviour. Geofrey, for example, wants to become a teacher. But when it comes to political violence, it operates on a completely different scale. The country is involved in mass violence, and it depends on who is in power. It is very difficult to stop the wave of political violence, like, for example, what happened in Syria, Chechnya. In Uganda the situation is also very precarious. But actually, it is not so bad – there is a certain balance there, a parliament where the opposition is very well represented. The army also has enormous power. I talked with many representatives of the armed forces, including the high military leadership, and they say that their main task is to keep the country from erupting into mass violence. This gives us some hope.

You submerged your characters into a situation of psychodrama. Have they changed? Did it have a psychotherapeutic effect on them?

It all depends on the individual. Mike, for example, is something of a fool – he is a good guy, but he’s rather simple, and I don’t expect him to change. But Geofrey latched on to us, because he probably wanted to work through some things he was feeling, but didn’t know how to do it. And he succeeded. He had long wanted to return to that old woman, apologise for her children, but he didn’t know how. He used us.I would not call it psychotherapy in the usual sense of the word, but thanks to our involvement, Geofrey had moved on. I help him pay for his university studies. Nighty has low self-esteem, she was abused as a child, and her husband is prone to violence – they break up and get back together all the time.

During filming she realized that she is worth something, that she could help other people.

We must understand that in 2002-2004 about thirty thousand children returned from the Lord’s Army. They almost all came to the North at once, and many humanitarian organisations and rehabilitation centres opened up there. The aim was to help the children adapt to normal life, they were following the Western manuals: how to behave, how to stop being a victim. And that formed a certain discourse imposed by the West. Despite the fact that these children are now thirty years old, they continue to use that experience.

Would you like to make your novel The Kindly Ones into a film?