Is Nothing Always Something? 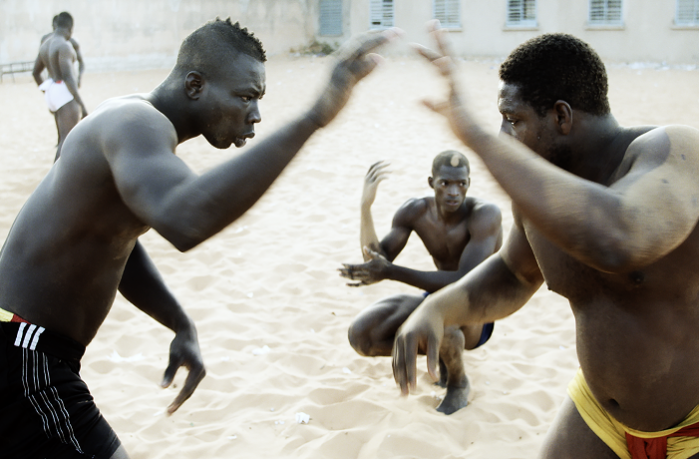 On the one hand, their film Untitled isn’t led by anything other than intuition. On the other, can nothing not be something? More than five years ago the Austrian director Michael Glawogger conceived a story in which the world would appear, provided it had an unconditional openness to the author.After his sudden death in April 2014, his co-director Monika Willi released a film comprised of the footage that was shot in four months and nineteen days spent in the Balkans, Italy and Africa.

Michael Glawogger’s films range from quirky comedies like Slugs (2004) and Contact High (2009) to documentary essays like Megacities (2009) and Workingman’s Death (2004). He never put boundaries between cinematic forms and genres. Among the many crossways of reality, he always strove to get to the essence of various phenomena. His last film, Untitled, shot and edited in collaboration with Monika Willi, is yet further proof that cinema gives us more freedom than we can imagine.

He started working with Monika Willi on the film France, Here We Come!, and after that she became his permanent film editor. Monika Willi has also worked with Austrian director Michael Haneke, especially on the film White Ribbon, which was awarded the Filmplus Editing Award. Untitled is the first film where she has served as a co-director. In our interview with Monika Willi we talk about nothing, the desire for closeness, and purity of flare on film.

When Glawogger conceived the story about nothing, did you know that you would be editing it?

The idea for this project had been fermenting for several years. Together with Michael and the director of photography we had long discussions about which direction the film should take. We tried to find a way that could express both openness and intuition. I would say that Glawogger’s spirit and desires had become his travelling companions.He was extremely unbiased in his life and in work.

In one of his last interviews Michael said that there is no greater challenge for a director than to make a film without a theme or a plot: “I want to be free to shoot what I want, and I do not know if I can take advantage of this freedom.” Do you think he managed to do that?

Yes. At the beginning it was hard, but by the time of his death we had begun to understand the way he transmitted his ideas via the language of art. I was sending draft edits to Glawogger during production. We shared ideas, mostly by phone. In our long partnership Glawogger always welcomed suggestions that, despite everything, enriched his very exact vision of what his films should look like.

What drove you to create the rhythm of bodies, textures and light in Untitled? If Glawogger had returned to Vienna at the end of his journey, he could have constructed the film very differently. This is like a golem in alchemy – raw clay and blood. How much of the author is in this golem?

At the heart of each film is an idea, a script, and from the moment it enters the editing room, footage is added to the mix. Then you start working on it, sticking everything together, and, depending on the type of film, you have more or less freedom of creativity. In this case, there was as much freedom as possible. Since Glawogger did not intend to die, and most of the work had still lain ahead, it is impossible to say what he would have constructed from the material that he intended for the film. The contribution of the author is in the footage, in how it was shot, and in his general approach to the film, which I, of course, was aware of.

What determines the choice of technique, technology and character presentation in a documentary film? After all, there are varying degrees of immersion into someone’s life, different degrees of analysis, including during editing, which give the film a completely different rhythm.

Each pair of director and editor has their own methodology. Glawogger and I had one. He had the gift of bringing out talent and passion in the people with whom he worked; he trusted you. This allowed you to dive deeper into the material and find your own way to bring together the loose ends in documentary footage. The more we worked together, the more Michael was interested in the first draft of the film, in a composition created by a person who was not involved in production and had almost no prior information. We discussed only the general information on places and locations. But upon further editing, he became more involved. Also... he was an outstanding dramaturge.

The music in this film also adds to the drama.

My collaboration with Wolfgang Mitterer started with Glawogger’s Cathedrals of Culture. Mitterer was my constant companion, his compositions appeared simultaneously with the editing – we had an interdependence of sorts. For me, editing with sounds is key, because only the combination of all the elements of the film creates a sense of how the footage works. For example, the scene with Senegalese wrestling: there are the original sounds and music – hours of singing – and Mitterer’s compositions. First, you must create a sequence that makes sense from an acoustic point of view, based on the original sound – for this, the composer plays with the inserts of background sounds or completely removes them. This is when that metaphorical world emerges.

You have worked with various Austrian directors. You had quite a fruitful partnership not only with Glawogger, but also with Haneke. What is the most important thing for you in working with feature material?

Each director has their own approach to filmmaking. Haneke has a very clear idea of the film from the start, so he works with a great degree of accuracy. Sometimes the material provides bigger opportunities to tell the story, sometimes smaller.

With Glawogger, as often happens, I was recommended to him by someone else, we worked together in France – and that’s the whole story! We got on really well, so we continued working on many of Michael’s projects together.

“All my films are actually about life, about the everyday, even when it seems like something shocking is happening on the screen. For example, in Working man’s Death, while filming the mass slaughter of bulls in Nigeria, everyone taking part in the action was shocked by one thing – that I was filming this utterly banal process they deal with every day. I was standing in a sea of blood and thought – how beautiful!” This is what Glawogger said about his films. What are they about, in your opinion?

Yes, editing the shots from the Nigerian slaughterhouse was one of my favourite experiences – though, I confess, sometimes had to turn off the sound while looking through the material. Of course, it is difficult to observe the work of a butcher, but the energy of these people and this place was so enormous that it passed on to you, when you got immersed in their world. It’s alive, sometimes funny, it has a place for disputes and love. The excellent work of operator Wolfgang Thaler in this documentary creates very vivid imagery. This, for me, is real cinema.

But the director was often criticised, it was said that his attempts to reflect reality were undercut by his propensity for shock value and drawing the viewer’s attention to artificially created situations. To that Glawogger replied that any documentary is reality siphoned through the mind of the director. How do you approach documentary material? How do you create your text of the film on the editing desk?

I fully agree with Glawogger that a film does not become more honest because it was shot by a shaky camera. There is no truth or objectivity in reflecting life. He chose his own way of portraying life, and I can speak only for myself – it is captivating to me. What is even more important to me is that he returns dignity to the life he depicts.

What do you think about the route in the film Untitled?

Glawogger always returned to the subject of exposed brickwork in the former Yugoslavia. For me it is a metaphor for the effects of the war that ended, but is still going on. Especially when you live so close – it reminds you of your own personal stories, our failures, of what happened to our dear friends. The wounds of war do not heal; in order to overcome war and death, if it’s even possible, you need time. That’s why we made Yugoslavia the starting point of his journey.

A creator, artist or filmmaker, living in very specific political and social spaces, always serves as the broadcaster of where he comes from, consciously or not. And in our world this cannot be avoided, because the position of the artist will be construed in accordance with the paths he chooses and who he represents at the moment, especially when it comes to, say, African countries. In this context, it is impossible not to mention the film We Come as Friends by Sauper. How do you think the politics of representation work in cinema?

Glawogger strived to have a clear, unmuddled, and open view of the world. He didn’t seek sensationalism – he sought to present everyday activities that, yes, become political in a very active and vivid way.

The off-screen narration in the film Untitled tells us that the hero seeks to be among the previously discussed routines and everyday life of strangers, and tries not to lose himself in it. Is nothing always something?

Can anything alive be ‘nothing’? I’m not even sure if the purpose or the theme of this film is the search for ‘nothing’, because we had no clear intention and no clear theme. Perhaps it is a striving for humanity, or a need for a particular sort of meditation, a pure reflection.