“For most of the film you see the director’s perspective” 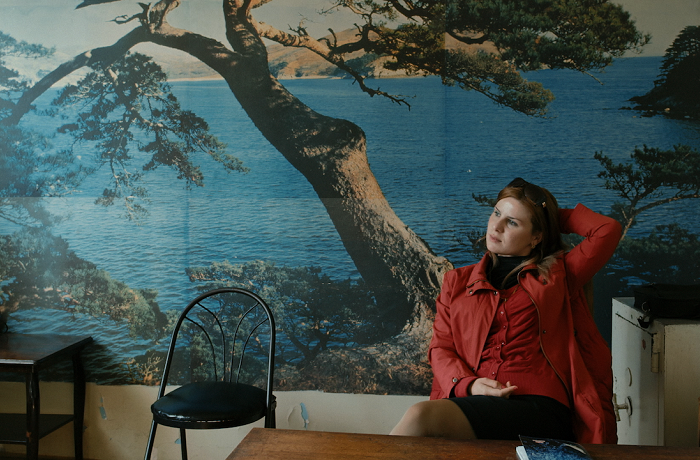 The television company in the small town of Tsalenjikha consists of a journalist and a cameraman. In this film by Salomé Jashi, who is also a member of this year’s DOCU/SHORT Jury, they become our guides through the everyday life of provincial Georgia.

Wedding celebrations, beauty contests, municipal meetings, election debates and monument unveilings – we see these stories in television reports, and sometimes, led by the director, we observe some things that may not be the focus of the journalists’ camera. What we see seems surprisingly recognisable to the Ukrainian eye: dilap- idated houses of culture, the search for beauty in bizarre embellishments, chaotic political meetings and traditional ceremonies – layers of modernities inherent in the former Soviet Union, where sensual folk singing on a half-crumbled stage sounds like a compelling metaphor for one of the former Soviet countries. The heroes of the film are our guides, but Salomé Jashi doesn’t follow them: we don’t know their motives or opinions about the different events they record – only their sincere commitment to those everyday stories. She creates a film like a painted landscape, where small events coalesce into a panorama of the entire country.

“For several years, I worked for the Georgian broadcasting company, so my initial experience as a journalist was the trigger. I have been interested in the topic of manufacturing information for quite some time. Then I saw some local newspaper from a small English town where the cover story was so minor, so unimportant in comparison the larger world news, it made me wonder what the news stories of small towns could be, what could matter for a small community.

I searched for small regional TV stations across Georgia. I visited about a dozen of them as part of my research and selected the one in Tsalenjikha you see in the film. I had met the journalist before in Tbilisi at a training workshop for journalists, and I liked her mellowness and dedication to her profession in a very calm manner. I was also attracted by how motivated the director of the station was, running the company on a very low income. The studio interior, the visual environment, was also a crucial factor for me to keep filming there.

To me the film’s title, The Dazzling Light of Sunset, has a double meaning: dazzling, which means bright, glamorous, beautiful; and sunset which is about an end, about decadence.

Although I studied documentary filmmaking in London, I probably didn’t live long enough in Europe to forget the excitement I get from Georgia. But it’s good to be away sometimes, to feel distant, so that it does not fully absorb you. This distance is important, but it’s also good to stay familiar. I would not want to be estranged. Then I would lose the feeling and understanding of the local people and lifestyle. I don’t think I’m ever nostalgic or sentimental towards my country. I am mostly critical, and recently empathetic. I spend more and more time here in Georgia now, and I extremely enjoy living here. To me it’s like a minefield, where you have to walk carefully or just get rid of the mines. Life here is like a gamble. It’s exciting, beautiful, painful, bohemian and poor.

The documentary film scene in Georgia has grown tremendously in the past few years. When we founded the Sakdoc Film production company in 2008, with a vision to not only produce documentaries but also to support the development of documentary film in the region, there were very few documentary filmmakers around us. The public associated documentaries with what you usually see on TV, like nature, animal and ethnographic films. Now there’s even a Caucasus Documentary Association and a documentary festival CinéDOC-Tbilisi. Social issues prevail, but films are being made on various subjects. And many of them are very good films, which also gain international recognition.

At the end of the film I allowed the protagonists to record a so-called disclaimer. Actually, by the end of production, the local government started to worry about what would come out in the film. And, as expected, they questioned and intimidated not us, but the TV station which we had been collaborating with. My friends suggested we should film this process and I thought it would be a wonderful idea. In this disclaimer, they could avoid responsibility for whatever appears on the screen and propose their vision of the film. We see them worried about the episodes I have chosen to film. To their remarks I have no answer. I might not agree, but I understand their point of view. I think it was fair to give them a voice, while for most of the film you see the director’s perspective.

My lifetime inspiration has been Sergei Dvrotsevoy, but also my tutor Gideon Koppel and his film Sleep Furiously. Regarding this particular picture, it’s difficult to pinpoint particular films. Working on a film usually starts with some sparkle and then grows into... you never know what, but some other films definitely give you encouragement for freedom. While working on this film I think Carlos Reygadas’ Post Tenebras Lux was one of those encouragements for freedom.”

26th March, 16:30. The discussion “Why ‘Female Gaze’ Matters and Why Cinema Needs Women Authors” will be moderated by special guest of the festival – the deputy director of the European Women’s Audiovisual Network (EWA). Other participants of the discussion include directors of the movies that take part in the festival’s program: Mette Carla Albrechtsen (“Venuses”) and Salome Yashi (“The Dazzling Light of Sunset”).