The Winners of Docudays UA-2018 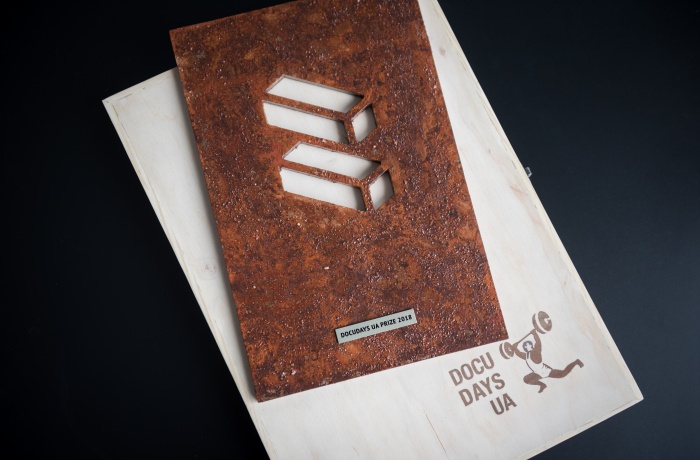 The festival week ended on March 29 at the Dovzhenko Center. The Center served as the venue for the award ceremony, hosted by the festival moderator Kateryna Popravka and the festival culture manager and translation coordinator Anna Koriagina.

Traditionally, the festival organizers also awarded their favorite film with the Andriy Matrosov Award. The Docudays UA audience also chose their own winner.

In addition, at the closing ceremony, the independent international news service Current Time also gave a special award to one of the festival competition participants. The $5,000 prize was given to the film No Obvious Signs by the director Alina Gorlova, “for subtle revelation of the protagonist's inner disaster”.

The festival has more and more awards every year, and we are very glad about that. This time, we also presented a new award from an organization which co-founded our festival, the Ukrainian Helsinki Human Rights Union. The award was given to Oksana Yakubova, the protagonist of the film No Obvious Signs, “for her willpower, courage and unfailing affirmation of the idea of equality between women and men with her own example”.

Instead of the traditional screening of the film which won the festival, the closing ceremony was concluded with a musical film performance organized by the Dovzhenko Center. The sensational film discovery Documents of the Epoch combines unique footage of Kyiv and Odesa of the early 20th century with film chronicles of Ukrainian history from the World War I until the late 1920s.

Great cinema is able to unfold the hidden aspects of human life, by projecting light where there are shadows. Starting from the hurdle of filming the main protagonists, the film finds the right approach to letting their testimonies resonate, and the strength of the found footage clearly shows the madness of war and the need to foster hate in order to create an enemy. The thoughtful construction puts the audience in the position of filling the gaps, giving shape to a moving and deep portrait of a complex world that finally becomes a universal experience.

A real portrait of a person who has gone through war and is trying to return to life. It is about the female face of war and about the traumas which affect everybody equally. The distance between the audience and the film’s protagonist is well-kept – there is no pity, falseness or excessive heroisation. The film is about the problems faced by those who return and those who wait for them at home.

One might think of it as chaotic, but a form is a form only if it is convincing. Many avant-gardists have put their camera on the ground and taken up a direct, more primitive way of looking at themselves and the world around them. Zhenya does that, too, assisted by a filmmaker whose editing skills just rock. The result lifts a seemingly naïve and simply hilarious, at times tragic account of life (of the 'man in the world' type) onto another level – a reflection of history, a transition in time.

ENTICING, SUGARY, BOUNDLESS OR SONGS AND DANCES ABOUT DEATH

Offering blissful cinematic moments and unexpected constellations (of fingers & textiles, gestures & cultural landscapes) this universal film about death (and beyond) impressed us with its sheer handcrafted mastery. And it touched us – by its calm lust for life.

Sharp tongues, cunningly edited. With an irony that is warm and respectful, and at the same time revealing a hilarious, outrageous backdrop of jingoism and Russophile chauvinism, a young father documents the state of the world into which his baby is born: family ties unite that which ideologies separate. At least in film.

MUSTARD IN THE GARDENS

A small house, a young woman, a hot summer, and strange sounds – sounds of war. Gradually we participate in a reflection on life in the middle of nowhere, albeit in a country whose existence (together with Europe’s constitution) is at stake. Life is an utterly personal matter, especially on the fragile Eastern borders of Ukraine.

Anchored by the belief in the purity and poetry of documentary cinema, this visually strong and well-balanced mediation between (and meditation on) the realities of life and the metaphors of decay depicts the ruins of the Aral Sea: a post-utopian scenery, inhabited by solitaires whose struggle is outshined by joy.

THE DISTANT BARKING OF DOGS

For the clear eyes of a child which are happy about the simple things, despite the melancholy in the shadow of war.

ENTICING, SUGARY, BOUNDLESS OR SONGS AND DANCES ABOUT DEATH

For being a daring experiment without borders and a journey without limits.

MUSTARD IN THE GARDENS

For the extent of love which knows no limits.

In addition, the film festival distributor LETTER TO FEST also chose the best Ukrainian documentary from the Docudays UA 2018 program. It picked the film No Obvious Signs. The distributor awarded the film’s authors a certificate which allows them to apply for participation in 50 international festivals free of charge.