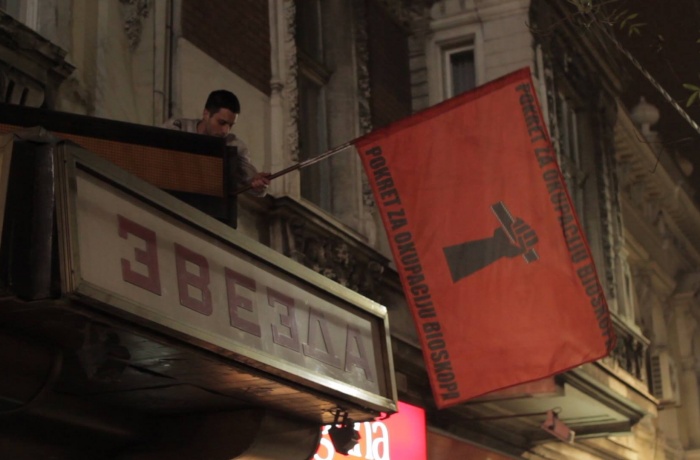 The film Occupied Cinema about a militant protest of young activists after the privatization of Zvezda Cinema in Belgrade inspired us to start a conversation about the Ukrainian context. The DOCU/ART program will include not just a screening of this film, but also a discussion about how activists reclaim public spaces in different ways. The discussion will be moderated by the art critic and researcher Yevhenia Moliar. By engaging experts, artists, urbanists and activists in the discussion, we will address both the general rethinking of the Soviet heritage in terms of the use of public spaces and the particular situation around cinemas in the capital. In our blog, the director and activist Polina Kelm, a participant of this discussion, shares her thoughts about the important experience shown in this film and about the events around Ukrainian cinemas.

Most of us probably know that strange feeling of deja vu, when something seems to have happened to you already, you feel like you have already experienced this, but you’re not sure how it will play out. This is the feeling you feel in your heart from the very first minutes of the film Occupied Cinema, when you see the footage of an abandoned hall in the Zvezda Cinema. For a moment there I felt like I was in a dystopia in the Kinopanorama Cinema. As if I was the one who was walking the dark halls with torn up faux leather seats and glass shards scattered across the floor, as if I was climbing up the marble stairs, catching sunbeams on my face. Nobody can be be sure if I just saw a film or indeed peeked into our shared cultural future.

In addition to the outrage this fall when we learned about the shutdown of two well-known festival locations, the Kinopanorama and Ukraine Cinemas in the historic center of Kyiv, just before the New Year’s celebrations we got another “wonderful” news: the Kyiv City Administration decided not to extend the lease for the team of the biggest cinema in the capital, the Kyiv Cinema.

Just for context, the cinema’s territory is 7,000 square meters. Today, it’s the only space in Kyiv which hosts almost all cultural film events organized by various international missions, such as the British Council, the Goethe-Institut, the French Cultural Centre, as well as screenings for the major film festivals, including Docudays UA, Molodist, KyivMusicFilm. If Kyiv ceases to exist as a cultural institution and turns into a place that shows only commercial, profitable, primarily Hollywood films, then the city center will be left without a single cinema where one could watch any alternative to the mainstream.

Instead, the Kyiv City Administration offered to consider the possibility of opening such an alternative cinema on the left bank of Dnipro, in Rusanivka or Obolon. It reminded me of the 1990s, when people bought old buildings with communal apartments in the city center en masse, and offered their owners in two- and three-bedroom apartments in the periphery instead. And those who did not agree to the exchange were just intimidated. For me, history is repeating itself, but now it’s wider and deeper. Will there be any space here for anything other than consuming material goods?

The first week after the announcement that two cinemas in the centre of Kyiv will be shut down at the same time spurred energetic activity in the creative community. An active initiative group formed. And not only one. I was also directly involved in this, so I watched from the inside how the protest movement formed and developed. The first weeks were the epicenter of clumsy attempts at active opposition, discussions, workshops, rallies, meetings with government representatives. Then misunderstandings started, schisms, promotion of one’s own interests, a split into two camps: the radicals and the moderates. Negotiation attempts, search for common ground between the government, landlords, activists, representatives of the cinemas. Provocations, insults, diminishing interest, burnout… Finally only five to seven people remained, with a pile of unsolved questions. Volunteering was over, but the cause hadn’t moved forward. And then the Kyiv Cinema precedent appeared on the cultural arena. Although rumors about the possibility of such an outcome were spread since the fall, nobody expected that the government will actually dare to make this “brazen move.”

Today, the outlook seems more optimistic. The activists have formed a non-profit which includes representatives of all the major Ukrainian film festivals which have their own stakes in restoring the creative space of the cinemas for their future activities. There is legal support. It’s all great, but there’s one significant “but.” This cause is the first attempt for the film community to assert themselves not by begging, but by demanding recognition as a serious player in the Ukrainian society. That is why it’s very important to properly articulate and defend our position here. And that is why I think that the film Occupied Cinema is now extremely relevant not just for the film community, but for all activists. Because it allows us to use other people’s mistakes to think about our own future strategy.

For good or bad, the current situation with Kyiv cinemas can either motivate us to create a full-fledged activist community, or push us into the abyss of personal strife. I want to believe that the light side will win. Because film is fantastic magic, where the harmonious combination of darkness and light gives birth to a different world.