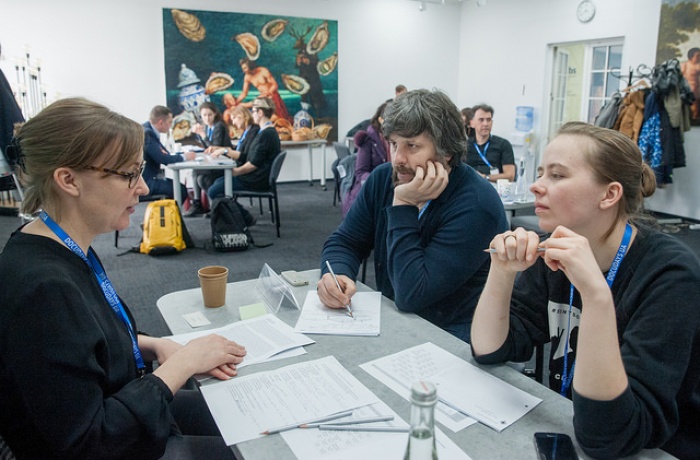 The industrial platform at Docudays UA has already become a tradition. Time after time, it serves as a platform for meetings among cinematographers from across the world. The special programme of short documentaries created in cooperation between filmmakers and activists during the CIVIL PITCH project serves as a kind of echo of last year’s professional contacts. These four Ukrainian documentaries have completed their year-long path from pitching to completion. While You Stay With Me by Yuliia Kochetova-Nabozhniak, No Status. Ukraine by Dmytro Tiazhlov, Shut the Fuck Up! by Taisiia Kutuzova and Facade Colour: Blue by Oleksiy Radynskyi present stories of sex workers, refugees, corruption and activists. The CIVIL PITCH films will be presented on 23 March between 5 and 7 p.m. in the Kinoman Hall of the Zhovten Cinema, and it will be open to anyone who books a free ticket.

We will also continue the joint project of the Baltic to Black Sea Documentary Network and DOCUDAYS UA which aims to facilitate the search for co-producers – B2B DOC: Producers Meet Producers. The selected participants, producers from Belarus, Armenia, Georgia, Moldova and Ukraine, will present their film projects to well-known documentary producers from Scandinavian, Baltic and other European countries who are interested in co-production projects with Eastern European filmmakers.

In addition, this year, DOCU/PRO offers even more opportunities for film industry representatives and other visitors to the Festival. Tetiana Tsybulnyk, DOCUDAYS UA editor, film curator and filmmakers, writes about the program of the DOCU/PRO section.

This year, DOCUDAYS UA will host the annual international Global Short Docs Forum (GSDF). The goal of the programme is to help directors of short documentaries to meet modern digital platforms. The 16 young documentary filmmakers from all over the world who are selected will work on their short film projects and learn how to pitch them. Afterwards, they will meet representatives of six digital platforms — Hromadske, Zaborona, the Guardian, Vice, Current Time and Al Jazeera — and discuss their possible cooperation.

“The purpose of the training will be to crystallise the ideas and the means of expression for the future films,” notes the Head of DOCU/PRO industry platform Darya Bassel. “In the end, the filmmakers will pitch their projects to digital platforms in the format of individual meetings, and the platforms will be able to purchase some of the films on offer. As a result, the filmmakers will have a chance to find new distribution channels for their stories.”

Today, online platforms are becoming ever more popular as a format for demonstrating documentaries. But what is special about such films, and how are they different from the ones which we can see in cinemas? Daniel Abma, a German filmmaker, will try to answer this question at the GSDF’s open event on 27 March at 10:30 a.m. In the 4th-floor hall of the Creative Space IZONE, he will present a case study in which he will compare the two versions of Home Games by Alisa Kovalenko, one made for the Guardian’s online platform, and the other expanded to become a feature-length film that travelled the world to be screened at film festivals.

In addition, as a part of the DOCU/CLASS programme, on 24 March at 3:00 p.m. in the Classic Hall of the Zhovten Cinema there will be a roundtable with representatives of online platforms and film critics about the development prospects of VOD platforms in Ukraine. “We’re going to talk about how Netflix and other similar services have affected the language and format of contemporary documentary film,” comments Olha Birzul, the programme’s coordinator. “The European film industry is also currently discussing how the influence of VOD platforms is completely changing the market, as well as the roles of distributors and cinemas.”

The question of the Internet’s effect on contemporary documentary films will also be considered by Olga Kravets, the author of a multimedia project about post-war Chechnya titled Grozny: The Nine CIties. Her workshop on 26 March at 3:00 p.m. will be about non-linear storytelling in film. The director will discuss the new genre of web documentary and the storytelling structure in interactive projects. She will also analyse the most prominent examples of such films made for the digital environment.

In addition, on 25 March at 1:00 p.m. the DOCU/CLASS programme will also present a workshop on sound in documentary films. Olha Birzul explains the idea behind the event. “We want to talk about sound and music in film from the ethical and aesthetic perspective. Sound is a very powerful instrument of manipulation, because filmmakers sometimes like to put the music on when they need the audience to cry. Ukrainian films are often overloaded with music and use soundtracks irresponsibly, although, in fact, work with sound needs its own kind of directing and very important analytical work.” Sound in films will be discussed by the sound editor Serhiy Stepansky, composer Anton Dehtiariov, music manager and copyright expert Vlad Mitsovsky, and Ivan Kozlenko, a co-founder of the Silent Nights Festival, which rethinks silent film classics using contemporary music. The conversation will be moderated by Maryna Stepanska.

The Ukrainian Doc Preview pitching, which will be included in this year’s Docudays UA programme for the first time, deserves special attention. Seven Ukrainian documentary projects at the rough-cut/post production stage will be presented to festival programmers, distributors and sales agents. The format will allow documentary filmmakers to receive feedback from industry experts and find potential partners for further promotion of their films. The projects will be presented on 24 March between 10 a.m. and 2:30 p.m in the Anshlag Hall of the Zhovten Cinema. According to Andrea Slovaková, the program coordinator at the Jihlava International Documentary Film Festival, who will evaluate the Ukrainian projects, this stage is strategically important for future film projects to reach the right audience and be presented in the best light:

“Without a proper presentation, the work will be lost in the vast ocean of new audiovisual content that is produced every day in the world. So it is more effective for filmmakers to let the people who are familiar with the scene of festivals, cinema and event distribution advise them about the best channels and ways to present their work. Each work has its unique characteristics, both thematic and stylistic. Therefore different channels, places and ways of presentation are suitable for different works. There are more than 3500 film festivals throughout the world. It is crucial to target the right places where the work can shine and communicate with the proper audience, spectators and other film professionals as well.”