NATINONAL GEOGRAPHIES: On Arts and War 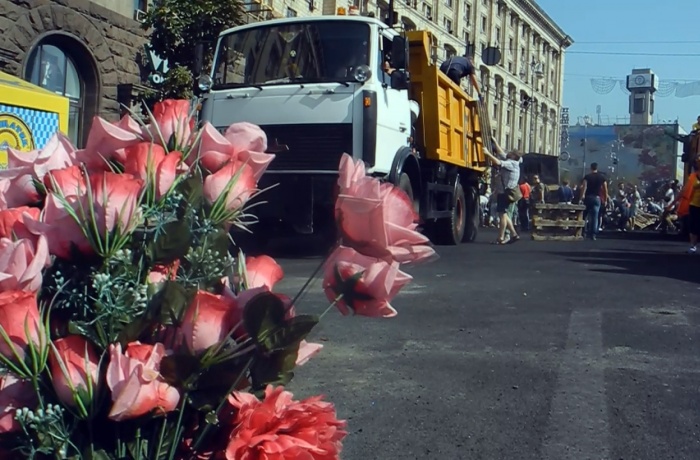 In the digital technology era, geography becomes imaginative, as the territories and spaces turn into images, fantasies, and projections. The NATIONAL GEOGRAPHIES program comprises documentary images from different cities of Ukraine that are combined in a virtual cinema map. Serhiy Vasylyev tells about the films from this panorama. The premiere screenings of this program will be held at the Lyra Cinema. Also these films will be shown at the Zhovten Cinema.

The Ukrainian films represented in the NATIONAL GEOGRAPHIES program can be divided into two thematic groups – by their interest to the creativity, through which life reveals itself, and by their attention to the war-perturbed everyday existence of the society, which is inseparable from art.

In her Gogol Doc, Alisa Pavlovska resorts to interviews and observations, deftly capturing the GogolFest-2016 contemporary arts festival, which unfolds in the industrial space of the capital, and the preparation to its crucial event – the BABYLON opera.

The chaos of the creative process, full of diverse artistic manifestations and numerous organizational mistakes that resemble the myth of the Babylon Tower, are structured through the demonstration of controversial interaction between Vlad Troitskyi, who is the festival founder and the opera director, and the producer, who is responsible for the technical aspects of the performance.

The first one is portrayed as a seamless guru, who is shedding the light of truth on everyone, including the authors of the film; in their turn, they perceive him respectfully and non-critically. The second one seems more of a ‘hamster in a wheel’ and a ‘scapegoat’, since he is accused of everything that was done wrong or was not done at all (even if the implementation of some ideas was impossible from the beginning). The third character, whom the filmmaker distinguishes from the organizing team, is the warehouse keeper, who always expresses his redundant, confusing, and not-so-sober opinion on any subject. While being discordant to the emotional mood of this film, this character, due to the humorous vitality of his appearance, prevents it from turning into a panegyric.

The characters of Lifelong Songs by Uliana Osovska, the 80-years-old participant of folklore collective Drevo Nadiya Razdabara from Kryachkivka village and the American Nadya Tarnavska, who takes part in a folklore mono-performance and teaches folk singing, do not require ‘the third one’. They are incapable of a false note – either on stage or in life.

Uliana Osovska unfolds their stories through symmetrical situations (both characters demonstrate photos from their past, take part in rehearsals and performances) and through meetings among them. The director dedicates more attention to Nadiya Razdabara, who carries the live singing tradition for many years and generously shares it, in spite of her hard everyday life and emotional pain. Music performances play the main role in the film.

Nevertheless, the film creators manage to capture not only the magic of folk songs and artistic mission, which is carried through the whole life, but also the very course of time, which is reflected in the landscapes that ‘react’ on season changes and in the movement itself – the characters’ journeys continue as the final titles are running on the screen.

The film ends with the words, “We’ll see what happens. It is a surprise”, reminding that life primarily occurs beyond the screen. Having captured the reality, the film turns into a ‘landmark’, by which one can estimate the changes that, under Ukrainian circumstances, are not always for the better. Three short films with off-screen commentaries by their authors prove this point.

My Friend Don Quixote by Stanislava Doronchenko is a portrait of theatre director Oleksandr Shmal, who continues working in Sievierodonetsk , despite many years of unfavorable circumstances. He admits that some people predicted him the fate of Van Gogh and Arto, but Stanislava Doronchenko compares him to Don Quixote, telling about him in the chapters entitled after this classical novel. Their intonation foreruns the depressing results of the main character’s struggle for official recognition and support.

Piotr Armianovski also resorts to a literary analogy, combining in his Black Cleaning the novel Black Council by Panteleimon Kulish, which tells about the collapse of Cossack democracy, with the reportage from the ‘cleaning’ of the Maidan tents and barricades in summer 2014, which was accompanied by fighting, singing, mottos, applause, and burning tires.

However, the five-year distance does not make the image of the ‘black council’ more convincing. In contrast, Leonid Yezhurov’s narrative about the community struggle for the Illusion cultural center in Kherson, which was supposed to be replaced with an apartment building, painfully strikes the nerves due to its timeliness. Illusion ends with the frames featuring the regional council chairman Vladyslav Manger and a gratitude to Kateryna Gandzyuk, who defended the cultural center.

In his film, Leonid Yezhurov widely uses ‘amateur videos’ of Illusion activities. His Bastille by Valeriya Treshchova is based entirely on ‘distorted’ home videos devoid of artistic elegance. These unexpressive frames mostly feature her father, who suffers from amnesia, but still recites poetry and sings songs that his memory has preserved wonderfully.

The daughter lives separately and visits him on several occasions, including the Bastille Day, which is her parents’ marriage anniversary. She films her ordinary visits in detail – mostly for her own memories’ sake. However, the film goes beyond the narrow domestic interest due to the fact that the parents reside in Donetsk.

Confessing in front of the camera, Valeriya Treshchova in a heartfelt way conveys the influence of the war, which never appears in the film, imposes its black mark on the human life, which is already full of tragedies, illness, and death.