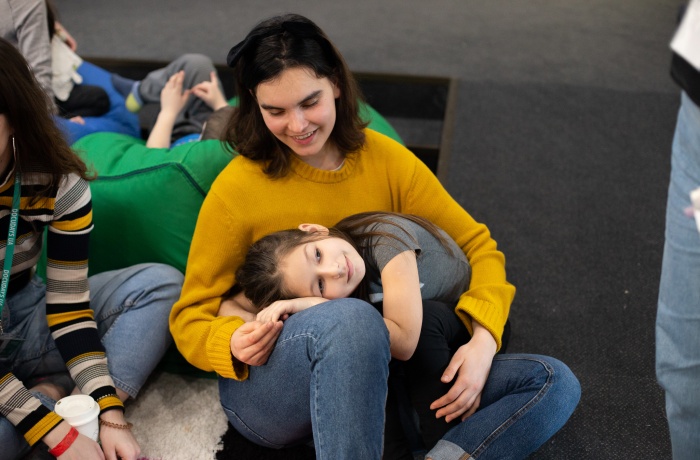 The digital environment provides us with unique opportunities. Unexplored educational horizons, new technologies for participating in government matters, the “new media,” open data resources which leave the traditional media far behind. In fact, the risks linked to Internet use evolve simultaneously, if not more quickly than the opportunities. That is why Docudays UA chose human rights in the digital age and internet security as its topic this year. The participants of the festival’s human rights program were probably the most concerned about our study of such forms of internet violence as stalking, cyberbullying and revenge porn. Read more about this in the text by Bohdan Moysa, an analyst for the human rights department of Docudays UA.

We realize that children are more vulnerable to the risks of the digital environment they are more open to everything new. International organizations also speak about the need to counteract these risks. So for the Docudays UA team, it was important to understand what Ukraine can counterpose to, for example, internet harassment of children.

Our preliminary review showed that despite the fact that the definition of bullying in the national legislation includes the component of “electronic communications,” the measures to counteract this type of violence which are proposed in the law are insufficient. By now, Ukraine already has decisions in four court cases about bullying where the defendants were brought to responsibility for spreading photos without a person’s consent. In two other cases, information technology is mentioned indirectly. And, unfortunately, the materials of these cases show that online harassment is being trivialized, the society does not understand all the dangerous consequences of this phenomenon and does not pay enough attention to it.

Things are even worse in our country in the case of responsibility for cybergrooming, even though Ukraine has ratified the Council of Europe Convention on the Protection of Children against Sexual Exploitation and Sexual Abuse.

More and more voices in Ukraine are calling for more effective state action to reduce the risks to children’s rights on the Internet. This is discussed by academic institutions, such as the Institute of Social and Political Psychology of the National Academy of Pedagogical Sciences of Ukraine, the Oleksandr Yaremenko Ukrainian Institute for Social Studies. The prevention and counteraction of children’s rights violations in the digital environment is among the strategic priorities of the Ukrainian Ombudsman and Children’s Ombudsman, as well as government institutions such as the Ministry of Education and Science, the Ministry of Justice and some National Police agencies (Juvenile Prevention and Cyber Police). Research, monitoring, education and human rights campaigns are also organized by international and local NGOs and human rights organizations, including the UNICEF, the Coalition for Children’s Rights in Ukraine and the Women’s Consortium of Ukraine, Ukrainian Institute for Extremism Research, International Women’s Rights Center LA STRADA Ukraine, NGO Parents SOS, NGO Magnolia, NGO Studena, Ukrainian Foundation “Children’s Welfare,” NGO Safe World and many others.

The team of the Docudays UA festival decided not to limit its activities to the research and discussion of the problem, and on March 28 organized and conducted a meeting of the majority of stakeholders, where they offered their findings and resources in order to strengthen the joint pressure on the government to oppose the dangers of cyberbullying and cybergrooming. We published our analytical study of the problem and demonstrated that the government’s actions are insufficient to prevent and oppose these risks.

At the same time, Docudays UA initiates a broad campaign to prevent and counteract cyberbullying. We intend to work together with all the interested partners to develop amendments to legislation, policies and programs for overcoming challenges for children’s rights in the digital environment. We also offer the key stakeholders who work on resolving this problem to use the resources we have — namely the Travelling Festival Docudays UA, the Media Education Film Club network DOCU/CLUB, our educational and analytical materials — in order to persuade all decision makers of the need to make the use of information technology as safe for children as possible.

In addition, the immediate plans of Docudays UA include creating animated documentaries to strengthen the campaign against cyberbullying.