Meet the moderators of the Ukrainian delegation to IDFA 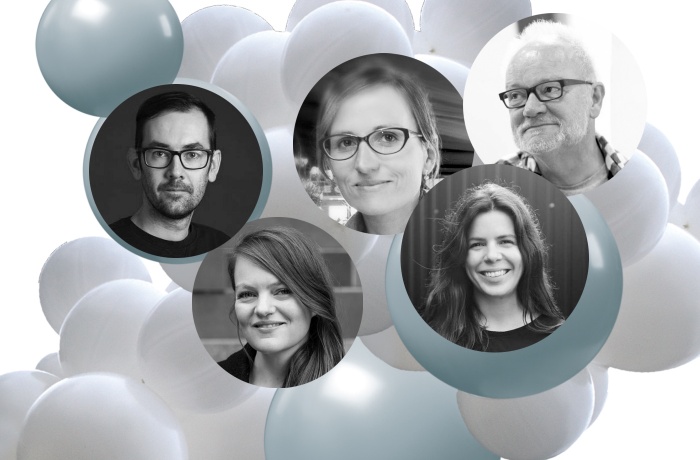 On 24 November, the Ukrainian delegation will be presented at the International Documentary Film Festival in Amsterdam. IDFA is famous for its powerful industry platform, which brings thousands of film professionals together every year. For Ukrainian documentary filmmakers, participation in the delegation is an opportunity to present their upcoming projects to the international professional community, to find funding and establish contacts with potential partners. For international guests, it’s an opportunity to be introduced to unique stories of the Ukrainian society.

The online presentation is open to everyone with IDFA Industry Passes.

After the event, guests will have the opportunity to learn about each project in more depth during roundtables with filmmakers and industry guests. We invited prominent film professionals to moderate these online meetings: Selin Murat, Zdenek Blaha, Brigid O’Shea, Anna Berthollet and Tue Steen Mueller. Now we are going to tell you more about each of them.

will moderate the meeting with the Storms Are Whispering project (dir. by Oksana Karpovych)

Co-founder of Parabola Films, Selin Murat has spent the past decade working in film and television in Turkey and Canada, producing award-winning documentaries for audiences at international film festivals, in cinemas, on television broadcast, and grassroots community screenings. She has worked with Radio-Canada, CBC Documentary Channel, Télé-Québec, Canal D, the Sundance Documentary Fund and many more. Selin’s international productions span from Quebec to Argentina, Colombia to South Africa, Japan to Turkey, including Nuestro Monte Luna (Hot Docs 2015), A City Is an Island (CPH:Dox 2014), Ariel (IDFA, 2013), Jeppe on a Friday (RIDM, 2012) and St-Henri, the 26th of August (Hot Docs, 2011). Also, she is a programmer at the RIDM festival. Quebec’s only film festival dedicated to creative documentaries presents the best reality-based films, including the works of established directors and new talents alike.

will moderate the meeting with the Iron Butterflies project (dir. by Roman Liubiy)

Brigid O’Shea is a native of Australia who has worked for European film festivals and documentary organisations since 2008. She has a Bachelor of Fine Arts obtained in Melbourne and Berlin, and she started as an intern at the Berlinale Talent Campus. She worked for various Berlinale departments as a freelancer until 2014, including the EFM and the Co-Production Market, until taking a more focused approach on creative documentary. This came from coordinating the DOK Industry Programme from 2009-2015, which also allowed her to freelance for the Institute of Documentary Film in Prague, for Documentary Campus Masterschool, and various Berlin-based production companies. She collected many professional experiences across diverse audiovisual fields as a freelancer, before being appointed Head of DOK Industry Programme in January 2015. She regularly tutors on topics such as European co-financing, cultural management and festival strategies in places like North America and Eastern Europe. In February 2020 she co-launched the Documentary Association of Europe.

will moderate the meeting with the Tales of a Toy Horse  project (dir. by Ulyana Osovska, Denis Strashny)

Anna works closely with buyers and partners from French, German, Italian speaking territories and the Netherlands. After obtaining her Master’s degree in Media and Marketing Sciences from the University of Geneva, Anna worked for several years in the banking sector, mainly as a project leader. In 2013 she undertook a career shift willing to invest her skills and knowledge into documentary producing. She graduated successfully from Ecole Documentaire de Lussas in France and attended several European workshops for producers and filmmakers. Since 2015 documentary sales and distribution snapped her for the better and she now oversees all activities at Lightdox, with special care for TV sales and Branding & Marketing.

programme director of the IDF

will moderate the meeting with the Pearl of the Absurd project (dir. by Oleksandra Chuprina)

Zdeněk Blaha has been working for the Institute of Documentary Film (IDF) since 2009. Currently he is the Programme Director of the Institute, overseeing the programmes and activities designed to support filmmakers from Central and Eastern Europe. He is mainly responsible for the East Doc Platform, a key networking event and film market focused on upcoming documentary films from the CEE region. Apart from his work for the IDF Zdenek maintains continuous cooperation with festivals within the Czech Republic such as Karlovy Vary IFF (as an expert on documentary film) or Summer Film School Uherské Hradiště (as a festival programmer) and others.

will moderate the meeting with the Shut the fuck up! project (dir. by Taisiia Kutuzova)

Tue Steen Muller is one of the best tutors who teach filmmakers to defend their projects at global-level pitchings. For twenty years, Tue Steen Muller has been a commissioning editor, a distributor, and a film festival manager at the Danish Film Academy. He was head of the European Documentary Network, and selected films and worked for film festivals ike DOCSBarcelona, Magnificent7 and DOK Leipzig. Now Tue teaches and consults with film directors in various European film schools, and most importantly, he is a renowned expert on modern Eastern European documentaries.

The project is supported by the State Film Agency of Ukraine.