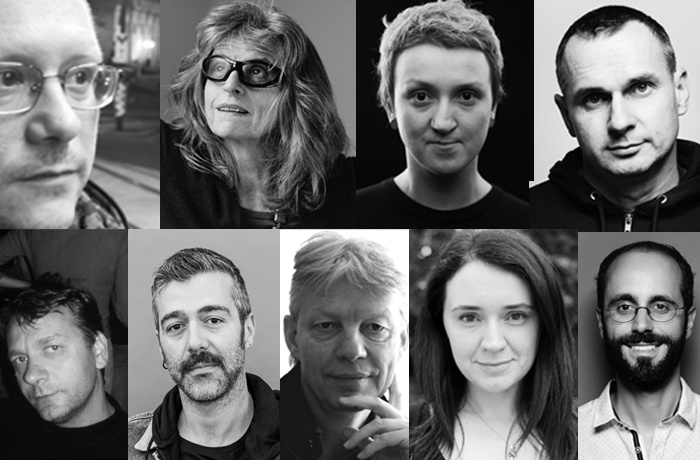 This year, the festival jury will choose the winners in the competition programmes DOCU/WORLD, DOCU/SHORT, DOCU/UKRAINE, and judge the films in the special nomination RIGHTS NOW!

In her documentaries, Claire Simon is often responsible for the whole filmmaking process: she is the director, the DOP, the editor and the manager at the same time. With a degree in Ethnology, Arabic and Berber, she came into cinema as an independent filmmaker – thanks to self-training and her curious view of reality. Today, Claire Simon is one of the most influential filmmakers in France, whose works spurred the rise of French documentary cinema. She currently teaches at Paris 8 and Paris 7 Universities and heads the film directing department at La Fémis.

As a culture manager and festival programmer, Xosé-Ramón “Mon” Rivas has worked with a number of world film festivals and prominent cultural institutions which have shaped his passion for cinema and art. These include the Scottish Documentary Institute, East Doc Platform in Prague, Doha Tribeca Festival (Qatar), Edinburgh International Film Festival. In addition, he co-founded the IberoDocs Iberian-American Documentary Film Festival in Scotland.

Born in France, Anthelme Vidaud has lived in Ukraine for many years. He has years of experience in working with cultural and film projects outside France, since in his career, he has had a chance to work in Malaysia and Morocco. He held the position of an attache in the audiovisual sphere at the Institut Français in Kyiv, and in 2014, he joined the team of the Odesa International Film Festival, where he still works as the Programming Director today.

The professional path of Mikael Opstrup has been incredibly intense: in the 1980s, he has worked in distribution and theatrical releases of documentary films; he was employed at the Danish Film Institute as an independent producer and advisor; he has tutored many workshops and forums in and outside of Europe, worked for over 40 documentary events across the world. He has been Chairman of the European Documentary Network, where he worked as the Head of Studies until last year. He is known as the main production tutor of the Ex Oriente workshop.

The journalist and film critic Vladan Petkovic works as a correspondent for Screen International in the territory of former Yugoslavia and as a regular writer for Cineuropa; he is also the Education Director of the GoCritic! study programme for young journalists and film critics. Petkovic also curates programmes for festivals in Croatia, Macedonia, Slovenia, and consults numerous international film festivals across Europe.

The RIGHTS NOW! award is given to creative documentary films which explore the contemporary world and make a significant contribution to the discussion of human dignity, freedom and equality. Ten films from all the film programmes of DOCUDAYS UA are nominated for it. The winners in the RIGHTS NOW! nomination will be determined by the Ukrainian filmmaker and writer Oleh Sentsov; Olena Rozvadovska, a specialist in children’s rights advocacy; and Enver Djuliman, an education activist and writer.

The name of the filmmaker, writer and scriptwriter Oleh Sentsov has become a symbol of the struggle for liberation of Ukrainian political prisoners in Russia. In 2014, after the annexation of Crimea, he was kidnapped by the Federal Security Service of Russia for his pro-Ukrainian position and volunteer activities and sentenced to 20 years in prison after being charged with “terrorism” in a fabricated case. However, the audience knew him before his imprisonment – thanks to his debut film Gamer, which was widely recognized both in Ukraine and globally. Today, after his release in an exchange of war prisoners, he lives in Kyiv and actively engages in human rights advocacy and art.

Olena Rozvadovska has several years of experience in organizing programmes for protecting children who are victims of the conflict in Eastern Ukraine. She is also the founder and head of the Children’s Voices Charity Foundation, and in a new project, she works with the team of The Distant Barking of Dogs, a film which the audience of DOCUDAYS UA are familiar with.

Born in Bosnia and Herzegovina, Enver Djuliman had to emigrate to Norway at the beginning of the war in 1993; today, he works there as an education activist and writer on the subject of reconciliation. For over twenty years, Enver has organized education programmes in democracy, human rights, intercultural understanding and peaceful resolution of conflicts in Norway, Ukraine, Russia, Belarus, South Caucasus and Western Balkans. In 2018, his book, Reconciliation: Signs Along the Way, was published in Ukrainian.