The soup with filmmakers 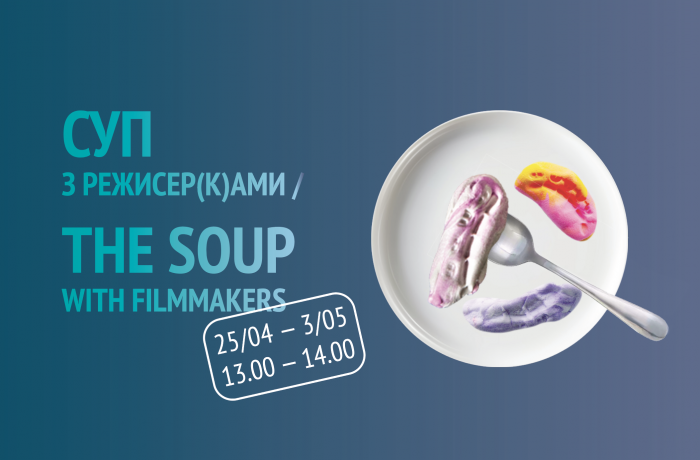 It’s lunch time. Wouldn’t you rather taste your quarantine soup in a nice company? We offer you a set menu of nine delicious soup talks during the festival week. Rules are simple. Firstly, eat soup. Secondly, stay not too serious about anything we discuss. Lastly, respect your soup mates and remember to watch documentary films. The audience-friendly navigation through the film program from soup to nuts. Join the conversation between filmmakers and festival moderators and watch their documentaries at DOCU/SPACE.

Svitlana Pryzynchuk lived in China for 6 years, where she studied the Chinese language, researched modern Chinese painting and got a master’s degree in art studies.

Born in Kyiv, graduated from Ukrainian Philology of Kyiv-Mohyla Academy; worked in the humanities and cultural sector since 2007. Started as a project and media manager; later turning into English-Ukrainian/Ukrainian -English translation and interpreting, film translation (subtitling, cc, dubbing), organizing and coordinating cultural events since 2008. Since 2014, she has also been active as a conference interpreter, while still involved at various stages of film production.

“I believe that storytelling is the most important of all arts, and documentaries have the power to tell the most fascinating and unbelievable, yet very humane and real, stories with ease. Stories and senses matter, now more than ever.”

Maksym Butkevych used to work for several Ukrainian TV channel as international news correspondent, for BBC World Service (Ukrainian Section) and for the UN Refugee Agency (UNHCR). Currently, as a coordinator for No Borders Project non-governmental initiative, he deals with issues of right to asylum and refugee assistance in Ukraine; xenophobia, hate speech and other forms of discrimination in Ukrainian society. Maksym takes part in Docudays UA festival as a moderator for number of years now. He also consults Alliance for Public Health (Ukraine). Degrees in social philosophy (MA, Ukraine) and anthropology of development (MA, UK).

Working as a journalist in printed, TV and online media for the past 12 years. Focuses on social issues, human rights and justice, reforms and conflict. Covered Maydan protests, Russian aggression, trials against Ukrainian political prisoners in Russia, the migration crisis in Europe. Editor-in-chief at Hromadske TV (2016-2020). Currently working as a journalist and media manager at Ukraine’s Public Broadcasting Company.