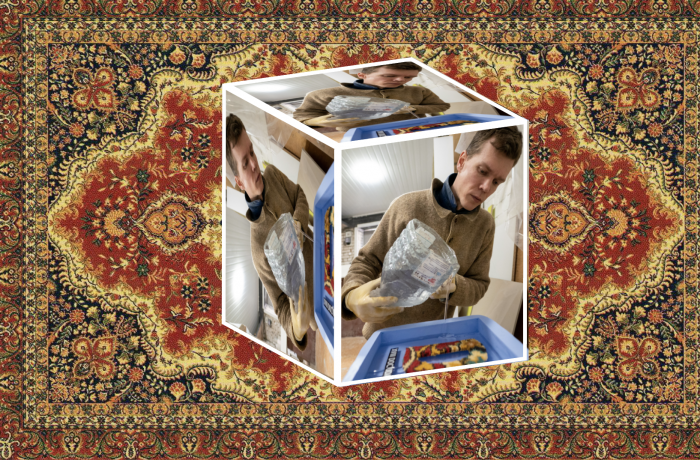 Serhii Borodin is a sculptor and master of sports in track and field athletics, a champion of Ukraine, Slovakia, and Europe. The most fame he gained for fabricating sports prizes; and this year, he made prizes for 18 Docudays UA that looked like transparent cubes containing a real carpet made of Anatolii Surma’s cartoons. Oksana Semenyk talked to Serhii about fabricating prizes and about ways to get full recovery.

You are the master of sports in track and field athletics and the sculptor. Did the sports or the art appear in your life earlier? How do you manage to combine work in these two spheres?

My dad is a master of sports while my mom is an artist. I’ve been growing up as a creative child and attended an art school; then I enrolled in the National Academy of Visual Arts and Architecture. At the same time, when I was 15, I started doing track and field athletics professionally. Between 2005 and 2013, I was a member of the Ukraine national team, while continuing to practice sculpture. In 2017, I gained a trophy of the European champion and thus decided it was a fortunate way to end my sports career. At this moment, art became prevalent in my life.

It seems to me that art and sport often connect. For example, let’s take ancient Greece with its cult of the body; ancient sculptors admired the bodies of Olympic competitors and set them in stone. The Soviet art advocated for a strong and healthy body as well, judging from mosaics, pictures, and sculptures.

Your specialty seems to be prizes and cups for sports competitions. What are the peculiarities of fabricating them?

To fabricate such a prize, one should understand the niceties of each kind of sport. Of course, there are big companies manufacturing prizes by means of contemporary technologies, yet their products tend to be mundane, homogenous, and devoid of distinctive features.

The first time I’ve turned my mind to fabricate my own sports prizes was after I’d watched a competition in free calisthenics. When the winners got their trophies, I put my attention precisely on the winner’s cup which looked like a hand holding a transparent flying ring and a girl doing a leg-split while hopping over it. I thought to myself, Wow! Was that even possible?

It is fascinating that handing out statuettes, prizes, and cups becomes more and more customary. Why, what do you think?

I believe it is related to the lack of sports financing in 1990th and early 2000s. Despite winning a competition, one could have left the field or a stadium without any medal, cup, or even a certificate. Now people want to be sated with things they’d been deprived of. I’ve traveled a lot and taken part in a variety of competitions abroad; I must say, nowhere have I seen such popularity of awards but in Ukraine.

I figure it should be connected to us realizing our ownership. In Soviet times, athletes awaited prizes and appreciation of the state; in 1990th, there was nobody to rely on for this. And now, we try to build the conditions for development on our own.

Except for various prizes, you’ve been working on monuments and sculptures as well. Don’t you feel a lack of time for creative labour? Do the approaches to various sculpture objects differ in principle?

The only distinctive principle is how I prepare to do the work. I mean, when producing my piece of work, I usually experiment with forms and materials. For instance, I might design a sketch for the start, a rough version just to see how the light is going to interact with glass or any other surface. To be honest, I’m more interested in sports and prizes; those are topics I tend to work with.

What is the concept of “full recovery” to you?

Everybody’s looking for a magic pill; however, the problems ought to be solved in an integrated manner. In sports, we have the term “running fallacy” illustrating a situation when a small detail prevents us from achieving results. It happens when a person is running leaned down; the reason for it might be rooted in weak joints or footsteps. The experts along with trainers are finding out this real reason and start working with a sportsperson diligently and consistently to fix the issue. I believe this method should be applied everywhere.