Paths to Recovery from Death 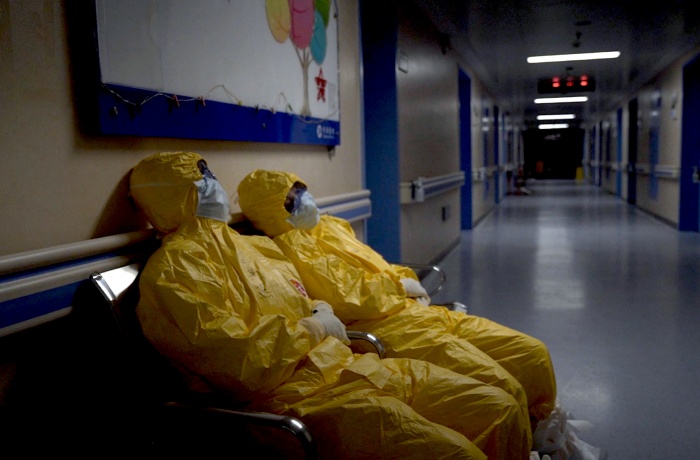 We continue to spotlight the festival program. Read Ivan Skoryna's review of films in the main programme of the 18th Docudays UA titled "Full Recovery?".  Watch the films of the programme on docuspace.org until April 4.

Coronavirus and its metaphors

In her essay Illness as Metaphor, Susan Sontag considers the metaphors used throughout history to describe illnesses that are hard to treat: cancer and tuberculosis. For cancer, this figure of speech is ‘corrupting,’ ‘corroding,’ and for tuberculosis it is ‘consuming,’ ‘wasting away.’ These illnesses have individual metaphors, while viral infections have social ones. For Sontag, the epidemic that changed modern medicine was AIDS. “Fear of the Communion cup, fear of surgery; fear of contaminated blood, whether Christ's blood or your neighbor's. Life — blood, sexual fluids — is itself the bearer of contamination,” she writes in Aids and Its Metaphors (Logos, vol 31, #1, 2021). In view of the more sudden nature of the COVID-19 pandemic, it adopted and intensified the metaphor of contagion. The danger here is not just blood, but also breath, which produce fear of not just touch, but presence itself. The moment when you get sick is hard to predict, it becomes clear only when your sense of smell or taste suddenly disappears, when you develop a fever and fatigue. At worst, you don’t even have the time to get used to the symptoms. Because it is also about the unpredictability of death.

We remember the panic around this image from the February protests in Novi Sanzhary last year. It was where the government evacuated Ukrainians from the Chinese city of Wuhan. But the locals saw their fellow citizens as a real threat to the lives of the whole village. As a result, 24 people were detained, 5 criminal cases were opened, 9 police officers and one local resident were injured. In 2021, this battle looks bizarre even to Novi Sanzhary residents themselves.

Before AIDS, health care was “Medicine had been viewed as an age-old military campaign now nearing its final phase, leading to victory” writes Sontag (1989). As we know, the final stage has not come yet, but the idea of heroic battle against illness has remained in the social discourse. At the beginning of the COVID-19 pandemic, many Ukrainians looked at the ‘successful’ (ensured by a totalitarian regime) experience of China. It is this Chinese ‘survival pipeline’ that is shown in the film 76 Days. The filmmakers Hao Wu, Weixi Chen and Anonymous uncover the naked truth beyond the metaphor of contagion.

Wuhan, a city of 11 million, was locked down on 23 January 2020. Depersonalized doctors in hazmat suits, duct-taped at the wrists, are running around hospital rooms without any time to restore their strength, sleeping in the corridors, holding back the crowd at the entrance and shutting the door in their face. The next shifts start before the previous ones end. But simple human tragedy can be seen through this depersonalized process. Forced to shout her last goodbye through the door, a doctor tries to see her father for the last time. Patients are crying as they talk to their families. The doctors have to comfort both the patients and themselves. To tell each other apart, they write their names on their work uniforms, and draw sakuras, smiley faces and portraits to ease the tension.

The ‘pipeline’ is based on the fundamental principle of health and survival at any cost. Dying is not just scary but shameful! The troublemaker character in 76 Days is an old fisherman who has dementia. He constantly breaks the hospital regime and walks out of his room: he cannot bear the pain and refuses to live, despite his non-critical symptoms. “Are you a real Communist Party member?” is the first question his son asks, trying to calm his father down at the doctors’ request. “You must be a model for others, just like before!” “I will be a Communisty Party member and dead!,” insists the old man. It seems that being a citizen of the People’s Republic of China is an even heavier burden than illness.

By the end of the film, the atmosphere slowly transforms into stability and welfare (once again ensured by the totalitarian regime). The symbol of the regime in the film seems to be the babies born by ill mothers and saved by the heroic doctors. Even the desperate fisherman comes around. Nurses idyllically see him out with applause. The celebration of life seems to continue, even under totalitarianism. On 8 April 2020, the lockdown in Wuhan was lifted.

Death and its traumas

If 76 Days depicts the survival pipeline, Beautiful Something Left Behind by Katrine Philp is a film about a small factory for processing death. The film shows the day-to-day of Good Grief, a group for children whose family members have recently died. “We don’t want to see you stressed or in pain,” a colleague tries to comfort a desperate nurse at the Wuhan hospital. “Do you remember being nervous?,” children are asked to start a conversation about other possible emotions: sadness, annoyance, grief. “Annoyed, mad and sad – purple, red and blue,” is how one of the group members describes his state. Here, they are prepared to see despair and help cope with a spectrum of feelings.

While babies born amid the pandemic seem to be a symbol of the ‘bright future,’ these kids show that the future is not so bright. Because it is inevitably overshadowed by the death of our loved ones. Is it possible to completely recover from this loss? It seems like the death of a loved one also gives you a new citizenship, especially when you’re a child. People start treating you differently at school, you have nobody to bring to a Mother’s Day celebration, you have nobody to give the “World’s greatest dad” cap, and now you are wearing a T-shirt “Uncles are the best.” Now you seem to be marked with a stamp of difference, a visa to the country of growing up.

A still from Beautiful Something Left Behind

But in fact, children experience trauma in different ways. Or more exactly, for some, the absence of one of their parents may not even become traumatic. The sister of the boy who cries the most speaks about her dad’s funeral lightly, and she’s happy that they were finally taken to McDonald’s. Another girl has never cried over the sad news and is content with the church hymns about Jesus, next to whom her deceased father also sees and hears everything. But the fairy tale of paradise also helps those who are aware of their loss. The children send gift lanterns to heaven and write letters to the ones they lost as if they will read them.

“Grief comes in waves,” one of the widowed mothers recommends to “ride the wave” and remember: “Beautiful something they left behind is us.” But, of course, it is also about the memory which the world is now infected with. Wind in the leaves, trees swaying, withered grass, a balloon in the branches which hasn’t reached heaven: the landscape in the film seems to be soaked with death, nostalgia, the absence of someone you need. “I am life, as death is death,” a mother reads a therapeutic book. It’s all true, but the life is yours, while death is always the death of others.

Health and its limits

For Aaron Traywick, the saddest day would be the day of his father’s death. But, as we learn at the beginning of Citizen Bio, this day never came for him. Traywick’s naked body was found in a deprivation chamber after it became clear that his business, Ascendance Biomedical, was sinking. He was a biohacking amateur and visionary who gathered like-minded people around him. The film, stylized as a ‘failed success story’ of a reckless dreamer, aptly demonstrates the relatively successful experiments of a whole community.

Russ Foxx, a biohacker, opens his front door and starts his motorbike with a hand with an implanted biochip. David Ishee tries to “fix” genetic diseases of dogs. Josiah Zayner has become the first person to test the CRISPR gene editing technology on himself. Tristan Roberts uses a different experimental gene editing technique to cure himself of AIDS. Gabriel Licina can see in the dark with special eye drops. “Desperate animals do desperate shit,” says Gabriel. All to avoid “being miserable.”

No wonder the founder of Wired Jane Metcalfe calls Josiah Zayner a biopunk. When this pathos of transgression is accompanied by a daring anti-system attitude, a biohacking subculture emerges under the name of ‘grinders.’ These ‘desperate animals’ want to freely buy pharmaceutical components whose sale is prohibited, they curse the government, wear “Motherfucking Math Professor” jackets and compare themselves to alchemists. Sometimes the comparison is accurate. “We have always been biohackers,” says the bioethicist Alex Pearlman, hinting that medicine has always had an amateur dimension at all times. Being outside of academia, public institutions, biased corporations or the science establishment is an integral part of biohacking. And it produces results. 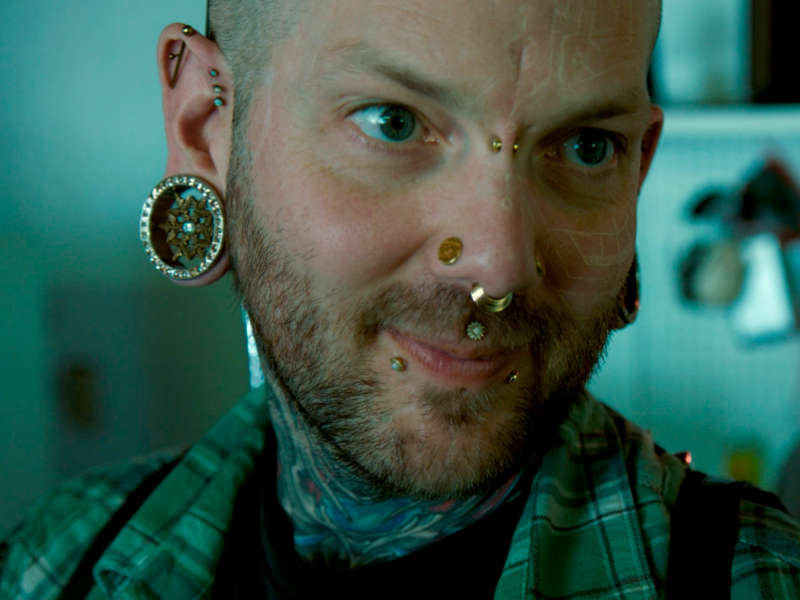 A Still from Citizen Bio

The technology which Tristan Roberts is testing on himself allows to disable about 98% HIV cells at the genetic level. This may bring about a more comfortable therapy which involves injections once in half a year, instead of taking pills every day. It “may,” because the technology is still unstable and needs to be further tested. Josiah Zayner has survived the CRISPR test, and now he is selling home gene editing kits and publicly advocates for the deregulation of the medical market. However, experiments with herpes treatment have failed due to a schism in the community caused by the authoritarian shenanigans and unjustified showmanship of Aaron Traywick. After this, Gabriel Licina took up the selection of bacteria which can destroy plastics in the ocean.

And Aaron Traywick could use the skill of accepting failure. In any case, it’s easier than accepting the death of your loved ones. Although for him, it was the same thing. And, as it will become clear at the end, Traywick’s “family reasons” are reinforced by personal ones. The “endless battle against illness” became his maniacal way of covering up his traumas, the obsession to help him escape. In the end, Aaron just exacerbated the worst illness which nobody has recovered from yet.