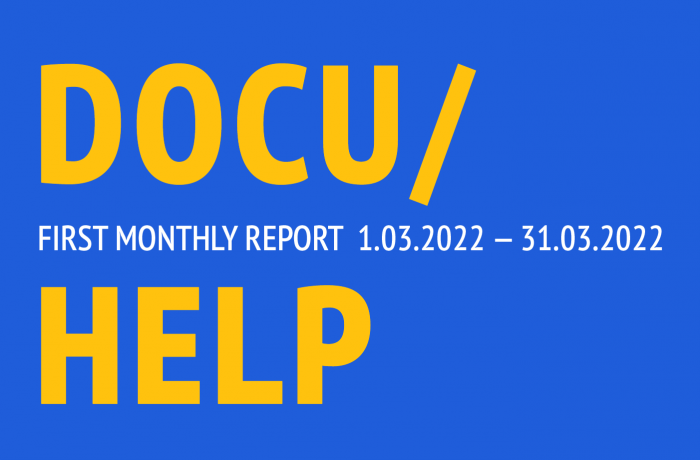 «In early March, in cooperation with Yelyzaveta Smith (TABOR), we initiated the DOCU/HELP Support Initiative. Thanks to the joint efforts of Docudays UA team, festival's friends and partners, we managed to support Ukrainian filmmakers who are documenting the events of the war," – says Darya Bassel, Head of the DOCU/PRO platform. – In our report, we share the information about the results of the first month of this initiative. But first and foremost, we would like to thank all our friends that made it possible. Everyone, who responded to our call, put aside other things and started collecting money, negotiating for discounts, promoting our initiative, and organizing logistics. These are our Ukrainian friends and colleagues: Yelyzaveta Smith, Mariia Khomiakova, Sofiia Doroshenko, Maksym Demydenko, Olenka Peter, Vasyl Yavtushenko, Valentyna Zalevska, and others. Our foreign friends also did a great job collecting funds and supply organization: Diana Tabakov and Doc Alliance Films team, Tomáš Potočný, DAFilms, My Street Films, Ji.hlava IDFF, Hypermarket Film, Punk Film, Prima televize, Television Institute in Brno, CINEPOINT, PINK, Tanja Georgieva-Waldhauer, Christian Beetz, Mark Bauder, Thea Herrmann, Doctor Patrick Hamm, Daniel Schultz, Maria Wischnewski, Produzentenverband, AG DOK, Deutsche Filmakademie, Deutsche Akademie für Fernsehen, Crew United, Filmmakers for Ukraine, and others.»

We work in two directions of support. We involve and coordinate the festival's partners from abroad to provide Ukrainian filmmakers with the essential filming equipment. We've also established the special NGO Docudays fund covering urgent financial needs of the filmmakers.

Here are the results of the first month of our initiative. 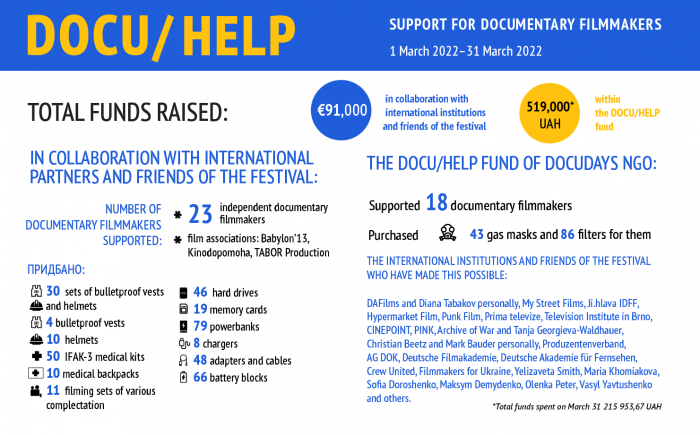 Within the first direction, thanks to the support of our foreign colleagues and friends from Germany and Czech Republic, we received several equipment supplies: camera sets with lenses, hard drives, memory cards, power banks, accumulators, chargers, adapters etc.

We have already supported 23 independent filmmakers and film crews Babylon'13, Kinodopomoha and TABOR Production within this direction.

«In order to manage the initiative funds, a directorate was created. Me, Ivanna Khitsynska, Oleksandra Bratyshchenko, Olha Beskhmelnytsina, and Archive of War founders Tanja Georgieva-Waldhauer, Christian Beetz and Mark Bauder, are members of this directorate, – says Darya Bassel. – Every decision is taken by a minimum of four votes (two from Ukraine and two from Germany). At present, the Initiative gathered € 75 000.»

Archive of War funds allowed us to purchase:

Within the second direction, we collect donations to the NGO Docudays accounts that will provide the filmmakers with the following:

We are grateful to everybody who supports DOCU/HELP and the filmmakers' community in Ukraine. Spread the information on the initiative by sharing this link so that more people can make donations.