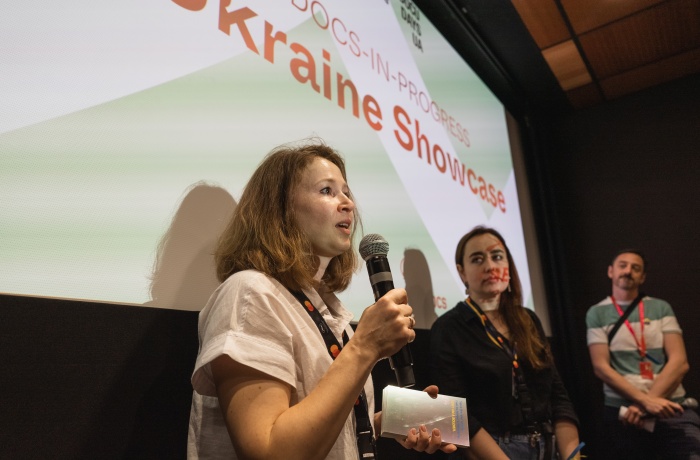 At this year’s Cannes Docs film market, two Ukrainian documentary projects received awards. Listening to the World by Liza Smith won a DAE award as a result of the UKRAINIAN SHOWCASE which will give the project membership in the organization and consultations at the rough cut stage from its leading experts. And during the Ukrainian Films Now presentation, The Iron Hundred by Yulia Hontaruk received an award from the Ciclic Centre-Val de Loire foundation in the amount of 15,000 euros for post-production.

The presentation of Ukrainian documentary projects at the film market in Cannes became possible thanks to a joint effort by Docudays UA and the Ukrainian Institute.

Darya Bassel, Director of the DOCU/PRO Industry Platform, notes: “I am very happy that Docudays UA and the Ukrainian Institute presented a Ukrainian documentary showcase this year. It would be impossible without the help of the Cannes Docs team, who provided us with everything we needed, including accreditation for our participants, free of charge. As well as the help of the French Institute in Ukraine that helped us cover the accommodation costs for the project authors.

“Ukrainian documentary cinema continues to develop rapidly even now, during the war, as it performs an important function of documenting the crimes of the occupiers. Documentary filmmakers film in Ukraine’s worst hotspots and see the most tragic events with their own eyes. So at events such as Cannes Docs, they act as Ukraine’s ambassadors and speak first hand about what is going on in our country.

“Of course, there is a lot of interest in documentaries produced in Ukraine right now. At the Ukrainian Showcase, the audience was so crowded that there wasn’t any room left even for the authors themselves. I hope that the new contacts established by the teams in Cannes will help them complete the films and present them successfully at the world’s best platforms.” 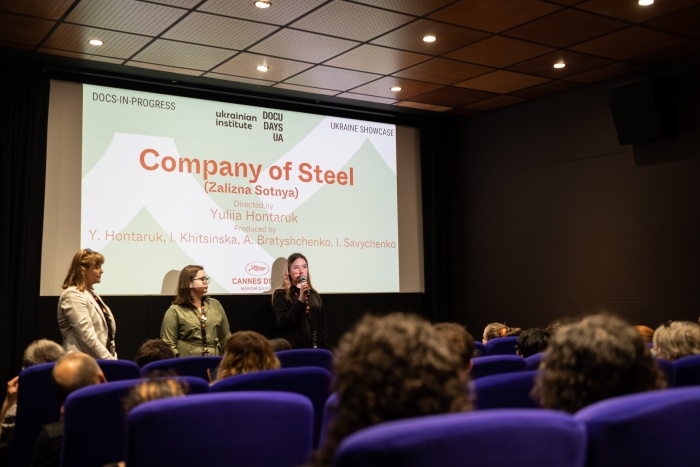 Natalia Movshovych, Head of the Film Department at the Ukrainian Institute: “In 2020, together with Docudays UA, we organized the first Ukrainian showcase at Cannes Docs. It was the year of the COVID-19 outbreak, and Marche du Film was held online, but we decided that Ukrainian filmmakers should stay integrated in the global film industry during a global crisis. When the full-scale invasion and all its destructive consequences began, presentation of Ukrainian projects to the international film community became critically necessary. Today, each such showcase on a key platform for film professionals, such as Marche du Film in Cannes, is an opportunity for filmmakers to finish their films and find partners for its promotion and distribution. It is extremely important for us that the Ukrainian film industry can continue its rapid development, survive this horrible time, and not roll back. Especially documentary filmmaking, which is very powerful in Ukraine and is now at the frontlines, recording the war. We are grateful to Cannes Docs for this collaboration and to Marche du Film for their support and solidarity.”

Both Ukrainian pitching winners are about the war in Ukraine, each in its own way. Listening to the World by Liza Smith tells the story of Iva, an art curator and activist who defends the rights of people with disabilities through art projects. Iva has hearing impairments and cannot hear the world. After the beginning of the full-scale war and heavy bombardment of Kharkiv, the protagonist and her son evacuated to Lviv, and from there to Germany. And The Iron Hundred by Yulia Hontaruk shows the world through the eyes of three volunteer soldiers who fought the Russian aggression first during the war in the East of Ukraine and then again at the frontline when the full-scale invasion of the Russian Federation began in 2022. 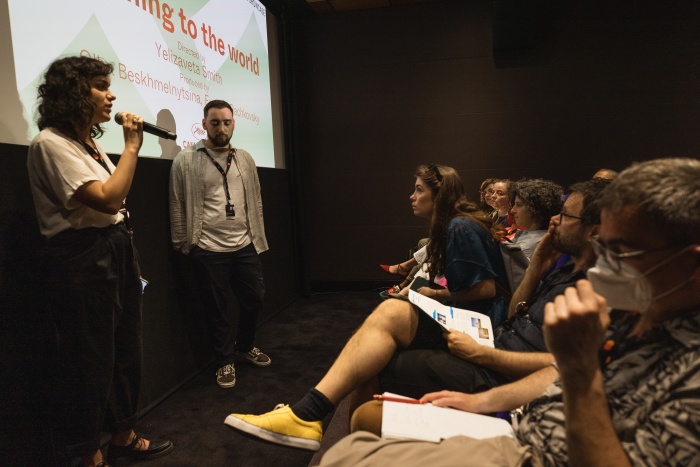 The Ukrainian delegation in Cannes, in addition to pitchings, also joined lectures, workshops, international showcases and special screenings. Liza Smith shares her thoughts on the events of the film market: “My impression of Cannes Docs is very positive. I can feel the openness and support from colleagues. Of course, here, you’re always on the run, late for meetings, but it’s worth it, because you feel that people in the world of documentary filmmaking speak the same language. All my thoughts are now about our country, so it was hard for me to stay in France in the reality of a film market. We focused on the tasks, met potential partners to receive support and continue filming. Now we are filming Listening to the World both in Ukraine and Germany at the same time, so our participation in Cannes Docs allowed us to meet potential partners and, most importantly, to talk about Ukraine.”

Yulia Hontaruk, the director of The Iron Hundred, a film which participated in two pitchings, notes that the award they received will bring the team closer to finishing the work on it. This year, it was more important than ever for our team and the project teams to speak about Ukrainian culture and the reality in which it exists today. Yulia says: “First of all, I was going to Cannes to talk about the war in Ukraine and the protagonists of our film, the volunteer soldiers. I saw my mission in spreading as much information about the war in Ukraine as possible among Europeans. There wasn’t a single day when I wasn’t talking about our defenders and the consequences of the Russian aggression. At every meeting, I talked about Mariupol, Azovstal and the war in general. And even from Cannes, I was remotely editing an episode of the Fortress Mariupol documentary series and kept in touch with the guys and girls from Azovstal: they were becoming prisoners of war right at that time.”

Ivanna Khitsinska, the producer of The Iron Hundred, notes: “The participation of Ukrainian films, including our film about Ukrainian defenders, in the industry section of the Cannes Film Festival is a kind of counteroffensive on the cultural front, allows us to tell the truth and to eliminate propaganda myths. The fact that our film about warriors won an award from the French fund Ciclic Centre-Val de Loire is telling and signifies that the entire united Ukrainian industry is moving in the right direction. The international audience’s trust and interest in the military topic has increased significantly. And it is extremely important to us that the whole world should see a personal story of the resistance and struggle of Ukrainians.”

In addition to the showcase of documentary projects, the entire day of 21 May at the film market was dedicated to Ukraine. On this day, there were presentations by Ukrainian producers at the Producers Network, and the Tallinn film festival Black Nights presented a number of feature projects at the Goes to Cannes section. The next day saw the Ukrainian Films Now presentation of Ukrainian projects, organized by EAVE, First Cut Lab and the Italian film event When East Meets West, in partnership with EFAD and CineRegio.