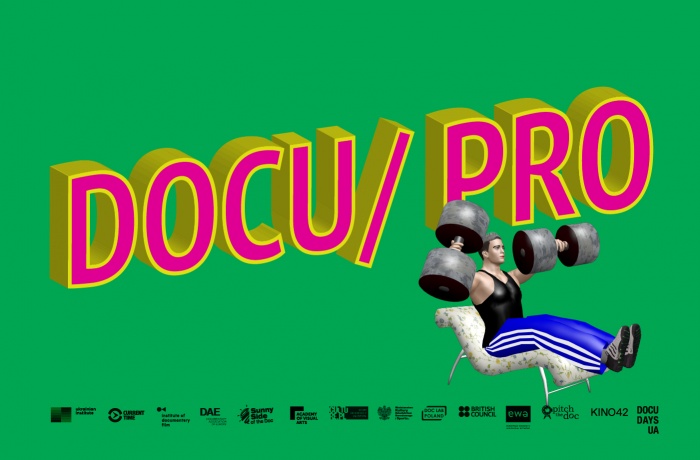 Docudays UA Industry Platform DOCU/PRO is created to promote the Ukrainian documentary films, to develop the Ukrainian film industry, and to establish contacts with international experts in the documentary world.

PROGRAMME OF THE DOCU/PRO 2021 PROFESSIONAL EVENTS

UKRAINIAN DOC PREVIEW is a showcase of Ukrainian feature-length documentaries at the stage of production/post-production. The participants present 10-minute video fragments of their upcoming films to international experts. For the second year now, Docudays UA has been organizing the showcase together with the Ukrainian Institute. This year, UKRAINIAN DOC PREVIEW will take place online on 29 March.

MEET PROFESSIONALS is a networking event and an opportunity to sign up for individual meetings with international documentary experts, receive consultations on your projects and establish professional contacts.

TALKS are masterclasses by leading international professionals who will share their experience in the processes of project development, coproduction, distribution and sales.

This year, in partnership with the Academy of Visual Arts Kharkiv, we are expanding the toolkit of documentary filmmaking and, for the first time, mastering the creation of VR films. The lecturers will include leading European experts in VR production. We will focus on the key stages of creating VR films: VR storytelling, technical equipment and tools for realizing a VR film, producing, funding, promotion and distribution of VR films. Lab organizer: Academy of Visual Arts Kharkiv. Project partners: VR HAM! (Hamburg) INVR.SPACE, NowHereMedia (Berlin), Docudays UA (Kyiv). Supported by the House of Europe.

Docudays UA, in cooperation with the Ukrainian Institute, organized the presentation of Ukrainian documentary projects UKRAINIAN SHOWCASE @ Cannes Docs, which was held on 22-26 June 2020 at Marché du Film as part of the Cannes Docs section. This year, for the first time, Ukrainian producers and directors presented their projects to representatives of the most influential international festivals and sales agencies at the main global film market—in Cannes. This was an opportunity for the authors of future films to find reliable partners for distribution and to arrange a global premiere of their upcoming film. In addition to the presentation, the participating projects received individual consultations from leading international experts, namely from the tutors of EURODOC, a well-known training programme for producers.

In 2019, within the framework of the delegation «Ukraine: Here We Go!»,10 documentary projects from Ukraine visited the largest platform for documentary films - a film festival in Amsterdam. Delegation members were producers and directors who work on first and second full-length films. They joined the festival industry events, visited the forum market and got advice from international experts. This visit was made possible through cooperation between Docudays UA, Ukrainian State Film Agency and the Ukrainian Institute.

In 2020, the Ukrainian delegation to IDFA took place online with support from the State Film Agency. See more detail about the delegation's program and the selected projects here.

Every year, the Docudays UA team compiles a CATALOG OF THE UKRAINIAN DOCUMENTARY. The English version is distributed at specialized international film markets. The catalog contains information about finished films and projects in progress, as well as contacts of Ukrainian independent producers, film and TV studios, festivals, distributors.