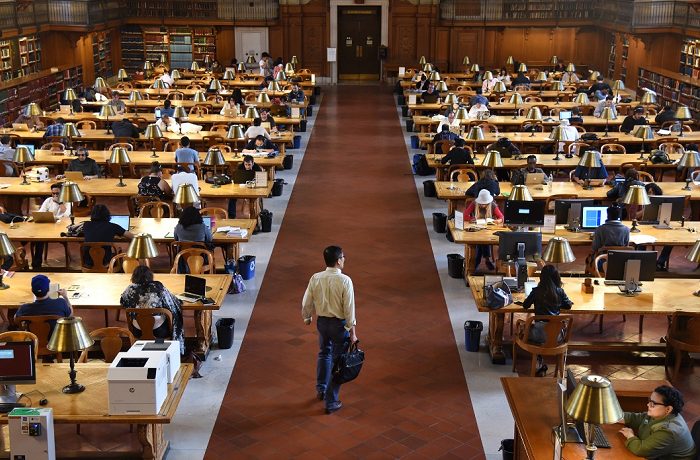 On March 24 at the Ukraine Cinema, Docudays UA will demonstrate a new film by the legendary documentary filmmaker Frederick Wiseman. Do libraries tell us anything about contemporary public space? Yulia Kovalenko, a film critic, discusses this question.

So, libraries don’t say anything about the contemporary public space anymore? Frederick Wiseman, the legend of documentary cinema, disproves that. His new film, which lasts for more than three hours, is a walk around one of the largest libraries in the world, which is an object of pride for New York. Life pulsates in its reading halls, between its bookshelves, even in the street between its buildings. Its evening showcase windows make passers-by stop to examine the old posters and editions; its entrance is covered with announcements, and during celebrations, chairs are set up outside, to allow the citizens to take pictures in the charming light of the many candles which decorate the library stairs. Just like any small or big city, the library is not the books and the walls, it is the people who fill it with life.

The camera saunters among the many events in the city branches of the public library, goes out from time to time, as if to take a deep breath of the life which swirls around the three departments of the book house, scattered around three districts of the Big Apple. There is no strict chronology to these sketches; they are not united by the same protagonists, or a director’s imposition of a rigid narrative, or by a voiceover. Through Wiseman’s lens, the library turns into a single living organism, a visual model of society. So this living creature can tell its own story better than any texts, speeches or interviews. It is a venue for book clubs, meetings with musicians, charity events, classes for learning the Braille system and sign language. Children here learn how to operate robots, and adults of various ages even dance here. At the same time, the present, with all its benefits of humanity’s technological achievements, is always intertwined here with the richness of experience of the past eras and generations stored on the bookshelves. The New York Library in Wiseman’s film testifies to the endless diversity of life, just like the stories in its enormous storage of more than 20 million printed books and manuscripts.

Ex Libris is the Latin term for a small mark that indicates who the book belongs to. Maybe all social institutions — such as libraries — are a kind of ex libris in the public space. They can be unassuming, but they can also be an impressive work of art; they can be modest or luxurious. But it is much more important that they actually indicate that these institutes are open to the society, that life itself belongs to us.

On March 25 at 2:00 PM we invite to the discussion "Library as a community center: utopia or reality?" in the Port Creative Hub (Naberezhno-Khreshchatytska Str., 10A). “Can public libraries undertake the new functions of informational, cultural, educational and community centers? How can their buildings and resources be useful to the community of the neighborhood, city or town where they are located? Can a library be truly inclusive and offer events for very different social groups? What is the role of libraries in the contemporary society?” These and other related questions will be discussed by Daryna Pyrohova (the event moderator) with practicians and experts from the library and cultural circles, as well as with representatives of library support projects.

The partners of the discussion: СEDOS, MISTOSITE, Port Creative Hub.