"State of Emergency" – a special edition of the 19th Docudays UA 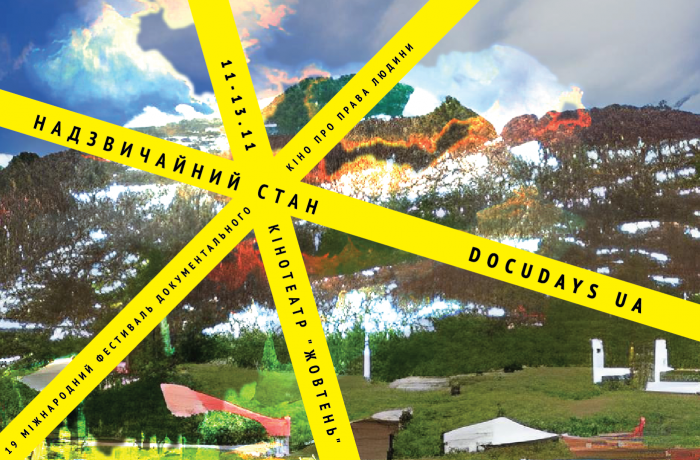 The 19th DOCUDAYS UA under the name Brand New World was supposed to take place in March 2022. We finalised the programme and worked despite the disturbing news. We believed in common sense and dreamed of meeting our audience in cinemas. However, the full-scale Russian invasion of Ukraine forced our team to postpone the festival without cancelling it.


We finally have a new date for our meeting. From 11 November to 13 November, we invite everyone to Zhovten Сinema for the documentary weekend "State of Emergency". A state of emergency is an exceptional situation when all other topics are put on hold, and ordinary life, state mechanisms, global security tools, and personal plans for the future require daily analysis and revision. The film Mariupolis-2 by the Lithuanian documentarian Mantas Kvedaravicius will open the festival. The film was awarded a special jury award Golden Eye at the Cannes Film Festival. In memory of the outstanding Lithuanian director, who was captured and killed by the Russians during filming on the outskirts of Mariupol, we will also show his previous film, Mariupolis.


This diptych makes it possible to understand the beauty and paradox of the city, which the director explored for many years. A city that has become a myth for all of us, and now is nearly destroyed, and which we have to liberate.


We have also prepared a block of relevant short films made by Ukrainian directors since the beginning of the full-scale war. But we will also review the best of the International programme of the 19th DOCUDAYS UA, which was prepared for you in the winter. We will also invite you to watch a new VR-film as a part of the DOCU/SYNTHESIS Interdisciplinary Programme.

Screenings in the capital will begin the Travelling Festival, which takes place every year in the regions. And for those of our viewers who are abroad, we offer to join the online events and discussions of RIGHTS NOW! at DOCUSPACE.ORG.


We decided to keep the image generated by an AI at our request for the “brave new world.” That was the topic of the festival we were preparing up until the moment of the full-scale invasion.


Now we’ve only added stripes to this image which resemble a window with sticky tape crossing it. Sticky tape is used on windows to protect oneself from glass shards during explosions and enemy missile strikes. We are keeping this landscape outside the window as an image of our victory, our country’s rebuilding and all of our other delayed plans which we will be able to return to.


We have also created an animated version of the visuals for digital platforms, with a constantly pulsating and shifting color background. The color here is the state itself which is always transforming and which we are supposed to capture.
_______


The 19th Docudays UA Special Edition is held with support from the Embassy of Sweden in Ukraine, the Stabilisation Fund for Culture and Education 2022 of the German Federal Foreign Office and the Goethe-Institut, European Cultural Foundation, International Media Support, Ukrainian-Danish Youth Forum, the Embassy of Switzerland in Ukraine and the Polish Institute in Kyiv. The festival’s inclusivity is supported by Oschadbank and Mastercard.