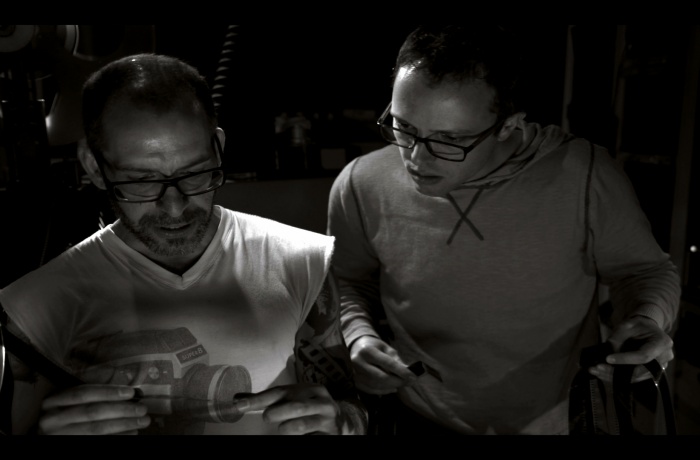 Screenings start at 9 PM. All Docudays UA screenings are free!

The Green Stage is a mini festival held each Friday in the center of Chernihiv during the 5 months of the warm season: early May to late September. Every Friday in the very heart of the ancient town of Chernihiv, a unique cultural happening takes place, including musical and theatrical performances, concerts, photo and art exhibitions, the master’s avenue, master-classes, and the creative space for kids.

Action stations in a cinema’s projection room: a film roll has got mixed up in the middle of a screening. The projectionist has no time to lose and must repair everything before changing the reel. He calmly explains the necessary movements to his apprentice, complete with anecdotes… This passionate and mischievous tribute to a dying skill shows a genuine ‘performance’ in a single long take.

The film poetically explores the universe of two eccentric Montreal taxi drivers. Taxi Pour Deux places the viewer in the back seat of the taxi as Louis and Jamel take us for a ride in their cab from Port au Prince to Algiers, from overseas to the island of Montreal, the protagonists passionately discuss life, love and death. Aesthetically the film uses panoramic image multiplications to complement the magical realism found in the storytelling.

Lysanne poured her heart and soul into the 2012 Quebec student protests. In the midst of the movement’s demise, she loses her way and finds herself confronted by her own thoughts and motivations. In the movement’s aftermath, Lysanne goes back to the conflict’s source, searching for a meaning to her actions, looking for words to define herself.

Vova is a guard at a private fishing enterprise. In the Soviet days and the early 1990s he was the head of a collective fishing farm. Nowadays he’s at the roadside of life, watching things go by from his vantage point – the abandoned Voyage cafe. His tales and stories make up a kaleidoscopic image of present-day Ukraine.

Thanks to her blog, for many people Joanna has become an icon of a thoughtful and joyful life. The blog describes her daily life honestly and accurately: her goals are as simple as a family trip to the Polish lake district; her planning as short-term as witnessing her son’s first successful bike ride without training wheels. She starts the blog when she finds out she has cancer and is given three months to live. Then she promises her 5-year-old son, Jas, that she will do her best to survive for as long as possible. And she starts writing for him.