DOCU/BEST: About family and war, about the earthly and the heavenly 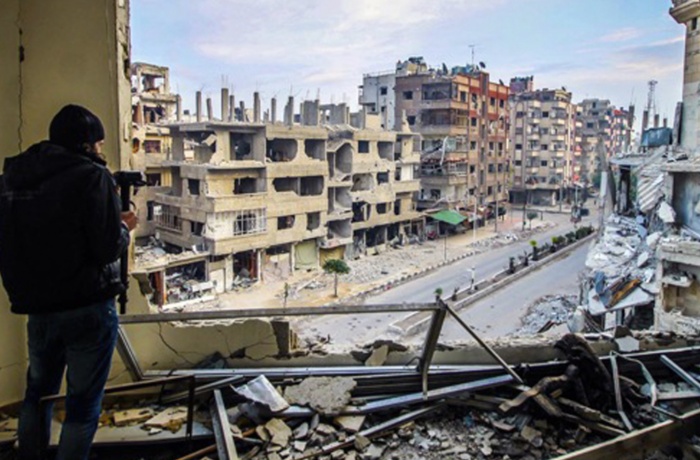 The films in the DOCU/BEST programme show the expected variety in their interaction with reality: they register it in a lively manner (ignoring beauty for the sake of facts or, on the contrary, emphasising the beautiful moments); they criticise injustice, helping to soothe the painful traumas of the past (both for the protagonists and, sometimes, for the authors themselves) and to stay on the meandering path of life. After all, these films contemplate how documentary cinema can even accomplish all these incredibly different tasks: to simultaneously serve as a living memory, as a time machine, as a tool for learning about humanity, and as something that connects the material and the spiritual world.

The story in the film Island of the Hungry Ghosts unfolds on Christmas Island, where an Australian detention centre for immigrants is located. The protagonist works as a therapist who helps the newcomers to carry the load of their de facto imprisonment: some of them have stayed at the centre for years and have no idea when their fate is going to be decided.

The immigrants’ monologues are full of suffering, cases of inhumane treatment, stories of resistance and obedience. One of them compares staying at the centre to hell, and there is no doubt about the sincerity of his words, although there isn’t a lot of visual evidence for it: the audience never sees the centre from the inside, only from the outside and at a distance. And its workers seem to appear on screen only once, unintentionally.

With artistic elegance, the filmmaker Gabrielle Brady demonstrates the stories that complement and highlight on several metaphorical levels the drama of the immigrants whose freedom has been limited. These are the stories of the island life of the therapist’s family; of the rituals which the locals perform to try to calm down the ‘hungry ghosts’ (the dead who weren’t properly buried); and of the mating migration of red crabs, who are carefully protected — even the roads are blocked so that they can move freely and without threat to their valuable lives.

From the film Island of the Hungry Ghosts

The only question which the film doesn’t fully answer is whether the things that the migrants fled from before they applied for asylum in Australia were worse than the harsh conditions of their detention. The lack of an answer doesn’t make the Island of Hungry Ghosts less persuasive emotionally, but prevents us from rising above the subjective level defined by the confessions, and reaching any kind of (at least conditional) objectivity.

The feeling that words have less weight than images, and exquisite images have less weight than unpresentable images which chronologically record the significant facts of reality, is deepened by the two-hour-long Still Recording. Saeed Al Batal and Ghiath Ayoub edited the film together from 450 hours of video recordings which were nervously filmed by many people with cameras in 2012–15, amid the Syrian war in the rebel city of Duma.

The issue of ‘correct’ filming is considered only at the beginning, when the protagonist, who regularly posts videos about the resistance on YouTube, uses the example of the Hollywood film series Underworld in his masterclass to explain his audience how to construct shots. Later, other characters borrow a camera from him and experiment with the focus a bit. But as the conflict unfolds, the people behind the camera pay less and less attention to the artistic detail, engrossed in recording military operations and murders, ruins and survival.

The combination of these painful fragments with private recordings from the everyday life of the protagonist and his friend, an artist who switched to the rebel side after a chemical attack by Bashar al-Assad’s army, generates a persistent feeling that everything that happens on the screen is a ‘home video’, in which the subjective and the objective are inseparable; that it’s a personal story in which the figures of the directors, the cameramen and the film’s protagonists merge with the camera that keeps on filming despite everything, even death.

A ‘home video’ filmed over many years and the figure of an author who is also one of the protagonists are also presented in the film Minding the Gap, which, in contrast to the Syrian chronicles, doesn’t reveal its significance right away — and not just to the audience. Bing Liu tells the story of himself and his two friends whom he bonded with over skateboarding. He gradually reveals that actually he is interested not just in the skateboarding culture (he films their accomplishments masterfully, meticulously capturing the moments of movement), but also in the not always light psychological factors that underlie their risky hobby. 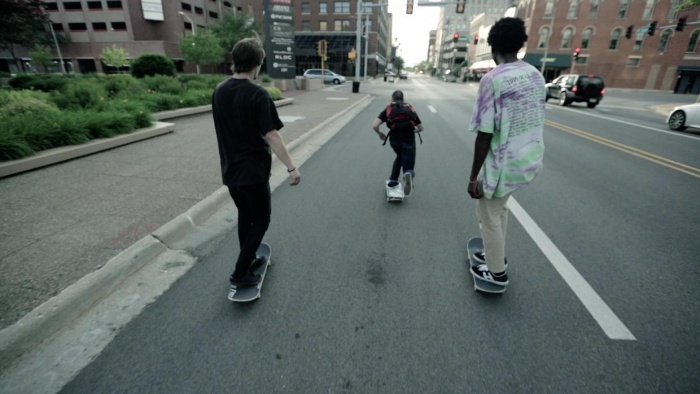 From the film Minding the Gap

The force field of the film is the conflicted relationships between parents and children, which are deformed by domestic violence. One of the filmmaker’s friends, who has experienced the death of his cruel father who was in acute conflict with him, is bravely trying to pull himself together; another friend, who is already a father himself, is on the contrary reproducing the devastating mistakes made by his and his girlfriend’s family in the past. As he follows these stories, Bing Liu gradually introduces the audience to the demons of his own past, too. The making of the documentary is a kind of therapy for him (for example, in the scene of the poignant interview with his mother, which he demonstratively records); but the meaning of this therapy goes far beyond personal limits.

The Ukrainian films Home Games and My Father Is My Mother’s Brother, which are also included in the programme, are about family as well. They form a kind of diptych based on long-term careful observation of the protagonists’ lives, which aims to record their courageous attempts to overcome the obstacles created both by an unwelcoming society and by imperfect human nature.

In Alisa Kovalenko’s Home Games, a young Kyiv resident, who wants to be in the Ukrainian national soccer team, challenges her circumstances. Her mother suddenly dies, and the film, which follows the girl’s anxieties, changes its concept: soccer recedes into the background. 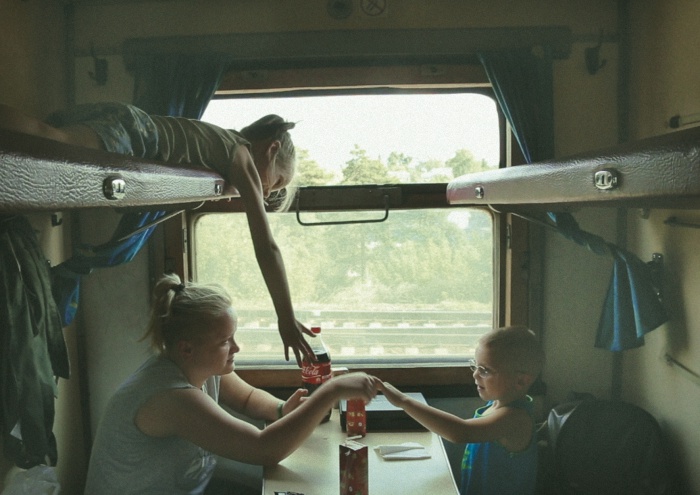 From the film Home Games

Watching the protagonist take care of her little brother and sister, Alisa Kovalenko sometimes hovers on the edge of speculation (there’s footage of the mother’s funeral, there is a scene of children playing the ‘ambulance’ which should save their mother’s life). However, in the end, thanks to her close contact with the protagonists, the filmmaker turns the story about an athletic personality into a story of everyday heroism, which allows the protagonist to survive the tragedy and helps her not to let her life descend into an everyday hell in a residential neighborhood on the outskirts of the city.

The relationship between Vadym Ilkov and the protagonists of his film My Father Is My Mother’s Brother, the family of the multifaceted artist Anatoliy Belov, is also full of trust. The film’s synopsis, of course, immediately lets the audience know what exactly is happening in the family and what challenges they face. Nevertheless, it is much more interesting to set that knowledge aside and watch the author gradually discover the complex circumstances. With every scene, he gives answers to questions which the viewers probably haven’t even fully formulated yet.

In his delicate and at the same time compositionally refined recording of the dynamics in the relationship between the artist and the 5-year-old niece he helps to bring up, and also with his sister who is losing her grip on reality and needs help, Vadym Ilkov creates an intimate family portrait which has room for the warm routine of a somewhat ‘bohemian’ life, for the accurately captured detail of momentary childish responses, for the inconspicuous courage in dealing with the challenges of fate, and sometimes even for the quiet irony of life (for example, when the girl listens to bawdy songs by Belov’s band Lyudska Podoba). 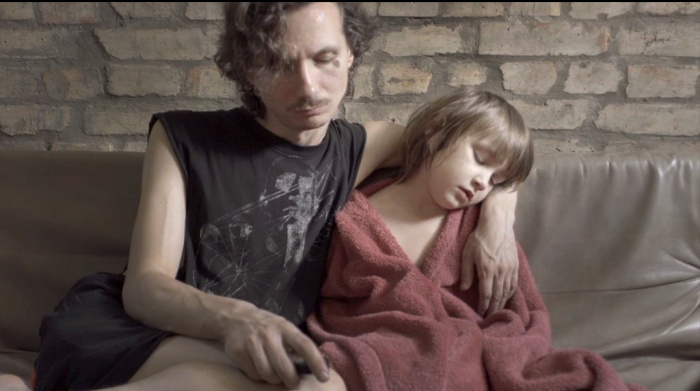 From the film My Father Is My Mother’s Brother

In turn, Audrius Stonys and Kristīne Briede paint a portrait of 1960s Baltic non-fiction cinema, and make an anthology of the portraits of its filmmakers. In Bridges of Time, they build editing bridges between the black-and-white past and the colourful present. In addition to the silver-haired filmmakers who share their thoughts about the essence and the purpose of documentary film (or just sit in contemplative silence), the screen also shows their aged protagonists and filming locations, visualising the passage of time, and simultaneously, the marvellous nature of film, which to a certain extent erases the boundaries between the past, the present and the future. Thus, it gives us an opportunity to speak about the eternal and to continue the wise, unhurried conversation that began in the 1960s. Part of the reason the Bridges of Time does that so successfully is that there are masters of documentary filmmaking not just in front of the camera, but also behind it.

After all, this behind-the-scenes mastery permeates all the DOCU/BEST films, just as we anticipated.