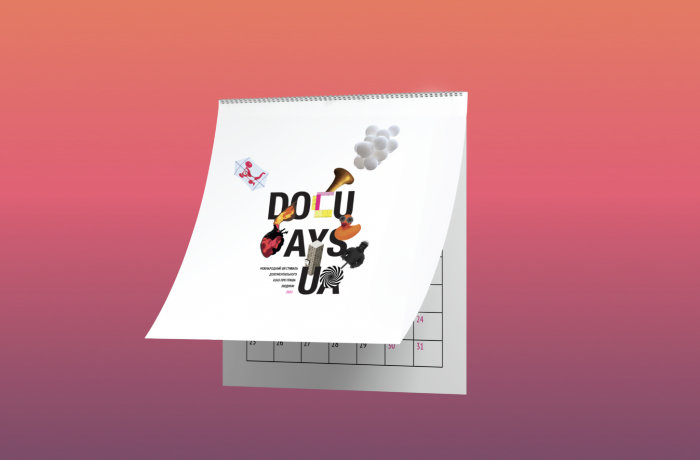 We have prepared another New Year’s present for the festival’s fans. We have created a wall calendar where we collected the most expressive festival images for the 17 years of Docudays UA’s existence. With the calendar, every month of 2021 will bring up a memory of your favorite documentary film festival.

“As you look at the festival images, you can travel in time: the dented copper instruments of the children’s band Dixie Land, who played at our opening in 2010 and whom we helped back then with a renovation and buying new instruments. The cardboard police officers, dummies from 2013. At the time, they still looked menacing, but it was already clear they were empty inside. The burning heart in hand from 2014. The year of Molotov cocktails, fleeing Yanukovych, a year full of rage, passion, hope and enthusiasm. A tank with a film projector shining from its barrel. That year, we talked about the influence of media and propaganda on the course of the war in Eastern Ukraine. Back then, you could still meet people who did not believe in the presence of Russian tanks in our territory. The Olympian hypnobears from 2016: the Beyond Illusions festival, where we said goodbye to old utopias and looked for new promising ones,” says Roman Bondarchuk, the art director of Docudays UA.

In 2017, the image of a tiger made of plastic waste spoke to us: “Humans, wake up!” That year, we talked about environmental protection and how it relates to our everyday lives, day-to-day practices. We discussed attempts at consolidation with nature, where humanity recognizes itself as its part rather than its conqueror. The multi-storied labyrinths of 2018 hinted that the issue of equality in the Ukrainian society is not that simple. That year, we addressed the discrimination of vulnerable groups: both its systemic and its personal dimension.

The visuals of 2019, with Excel art by Oleksiy Say, immersed us in the depths of the digital world, which, after all, has kept us all a little bit captive for a long time. The issue of privacy, online censorship, cyberbullying and information wars, but at the same time, broader access to knowledge, the capacity for online investigation are the things that bring the globalized world of technology into our lives. In 2020, the adventurism and boldness of youth supported us in our first attempt to hold Docudays UA online during a pandemic. Because this year’s festival topic was about the challenges of growing up and children’s rights.

“With these illustrations, collages and photos, you can study the country’s history of recent years. But you can also just remember yourself from those years and your own film experience at the festival. This is an important retrospect for us which motivates us to hold the bar high. To embody the most relevant topics in artistic images, films and discussions. To look for solutions and find them. To produce visions of the future. To grow intellectually and emotionally. To improve reality around us,” adds Roman Bondarchuk.

We are grateful for the creation of images throughout the years to Varvara Perekhrest, Maryna Dykusia, Darya Podoltseva, Darya Averchenko, Roman Bondarchuk, Oleksiy Say, Vadym Ilkov.

>> You can purchase the calendar in our store.