DOCU/UKRAINE: In Search of Lost Time 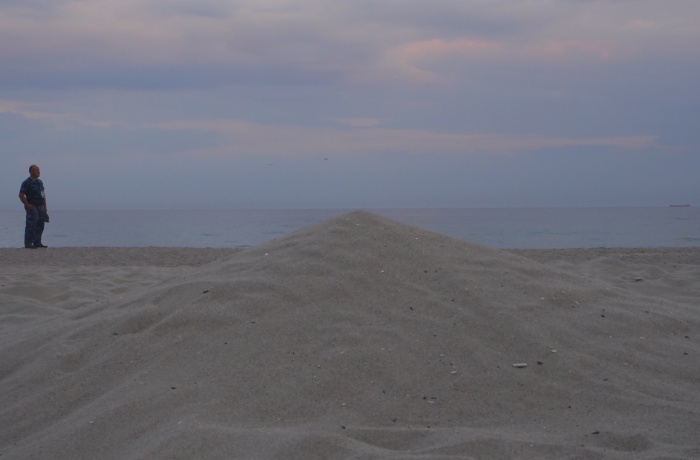 This year, the Ukrainian documentary competition DOCU/UKRAINE includes five films. Yulia Kovalenko, a film critic and the Festival’s managing editor, writes about the challenges, feelings, fleetingness and freedom in these films.

A car is driving through a typical Ukrainian town. Through the window, we see desolate streets lined with apartment buildings and insulated pipes, overgrown with lush green trees. Ukrainian flags are fluttering on lampposts. A little further down the way, the serene scenery is replaced with barriers, concrete blocks, car tyres and military machines. “Welcome to the Golden Gate checkpoint which defends the town of Shchastia (Happiness),” the driver remarks ironically. The actual defence, of course, isn’t happening here, in the middle of a broken road in a town that has been returned to government control. It is happening further down the road, at the military positions and dugouts to where the car is headed. Brothers in Arms is a film born of documentary footage made by Myroslav Hay, Kostiantyn Mohylnyk and Serhiy Lysenko during their regular volunteer trips to the conflict zone in Eastern Ukraine. 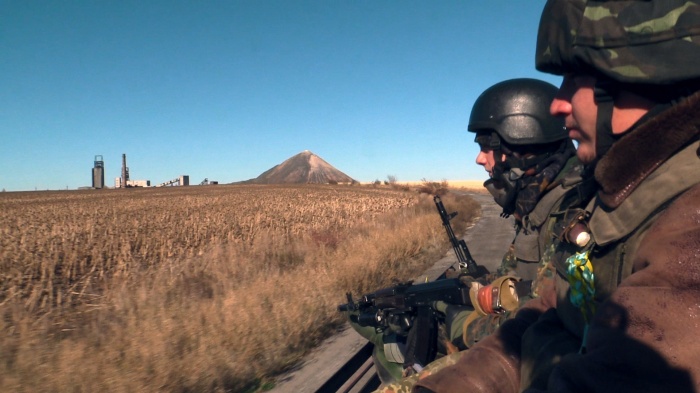 Brothers in Arms by Serhiy Lysenko

This film probably stands out from other films about the Russian-Ukrainian war because of its lack of pretentious illusions and its sort of tired feel. “I don’t want to shoot,” says a Ukrainian soldier. His tank has taxi squares painted on it. The witty joke reminds him of his civilian life, where he made a living as a driver. “I don’t want to! If I have to, I will. But I don’t want to,” he continues. The reality, battered with bullets, flows in a different dimension here in the Donbas. The viscous time exhausts you, it forces you to go in circles when you’re not shaking from explosions. “We live here every day, guys! Every day!” the locals explain, pointing at the cellar where they hide from the fighting.

Some machines break, food supplies are delivered, letters from children are received, a position is bombed… In the mundanity of this war, time seems to freeze. Its thick fog disperses only when you have to say goodbye to the dead, forever. But in a moment, the clock hand picks up its heavy, sluggish rhythm. It’s no accident that the film’s chronology can be figured out only from the traces of simultaneous events or in the phrases dropped by its protagonists. “We don’t want the war.” We hear this from the screen many times. Nevertheless, after years of tragic events and thousands of deaths, this phrase has become entangled in an ideological context, and it seems like there can be no neutral way out of this military hell. So it goes on. “You cannot consider this film complete,” someone says off-screen. The reason is clear: the war is still going on.

A similar theme of being frozen in time can also be encountered in Simon Mozgovyi’s The Winter Garden's Tale. This feature-length film which grew from a short project is formally about the intricacies of staff changes in the Flower Pavilion at the former Soviet Expo Centre. Valentyna Voronina, who has worked with the many plants in the greenhouse for forty-five years, is the real master of the place: she knows better than anyone what needs to be done and how, and she closely monitors the adherence to the routines that have been established and tested over the years. In this garden, the passage of time is evident only in the flowers, the trees and the memories of former colleagues who passed away. And although there is no doubt about Valentyna’s good intentions — just look how lovingly she patrols her domain, trying to figure out the energy of its every resident, — she sternly criticises any independent move on the part of her colleagues and subordinates, as if they threaten this frozen world.

Suddenly the air itself is shaken in this timeless domain. The management refuses to continue Valentyna Voronina’s tenure and forces her to retire. The Pavilion needs change, it needs new faces. These are the cruel words that the woman hears as a justification for her layoff. She’s even been replaced already. “Do you believe that she will just leave?” the staffers ask the new manager. “She’s still going to come here, interfere, control things.” Simon Mozgovyi finds an apt metaphorical form to talk about the issue which might be the most urgent for Ukraine. Is it possible, after decades of imposing a certain worldview and a distorted historiographic approach, after lingering long in the past, to just shake off the dust of inertia and take a step forward, as the administrative and legislative perspective tries to claim? The filmmaker gives the audience an opportunity to find an answer to this question by themselves. He stops at documenting Valentyna’s visit to the pavilion after she was fired.

Still, is it fair to talk about the past, about time in general, in generalised terms, erasing private experiences and stories? A Portrait on the Background of Mountains by Maksym Rudenko is like a postcard about its protagonists’ former private life, which is dear to their hearts. “These are my parents! My family! Where did you get this?” a man asks the film crew as he looks at an old photo with tears in his eyes. This poignant photo was taken by Paraska Plytka-Horytsvit. The artist and researcher recorded the life in her Hutsul home village of Kryvorivnia on film from the 1970s. As an ascetic person without a family, Paraska’s only legacy were her many works, particularly almost 4000 photos and negatives which were almost accidentally found and saved from damaging processes in 2015.

A Portrait on the Background of Mountains by Maksym Rudenko

In 1992, Pavlo Fareniuk made a documentary about the Hutsul thinker when she was still alive. Back then, cameraman Oleksandr Koval’s camera recorded a 30-minute portrait of Paraska, interspersed with marvellous mountain landscapes. Just over a quarter of a century later, Maksym Rudenko films Kryvorivnia’s residents against the mountains, quoting Plytka-Horytsvit’s photo series. Addressing her creative legacy, the filmmaker chooses to focus on the way memory works, on what it picks out to carry through the years. As she took pictures of her fellow villagers, holiday celebrations, traditions, the nature, her own artworks, Paraska seemed to fly freely, leaving behind her difficult past, the exile, the ruined youth and the lost opportunities. “I was recently asked, how can you live in the mountains like that?” says one of the film’s protagonists. “Transportation doesn’t reach here, we need to climb up on foot…” Her story is picked up by another villager: “A five-year-old girl once looked up at our houses and said that they were stars. Because at night they shine as high as the sky.” Here, among these stars, people have learned to fly, carrying only the most important things from the past with them in their memories.

A kind of freedom and independence is also pursued by the protagonists of Andriy Lytvynenko’s Reserve Askania. The wonderful photography reveals the marvellous beauty of the Ukrainian steppe on screen. This beauty is the reason why the majority of the film’s protagonists have tied their lives to their work in this natural gem in Kherson region. Some of them have already spent many decades here, and now they seem to be having an internal dialogue with the animals who live here, and know all the secrets of life in Askania. Neither time nor the fuss of the social world touch the natural reserve. Here, you can only pretend to lock your door with a nail. Here, old newspaper clips lie motionlessly on the same spot for years, collecting thick layers of dust. It feels like Askania is an isolated kingdom where time has been cancelled. Only seasons exist here, following each other in circles. 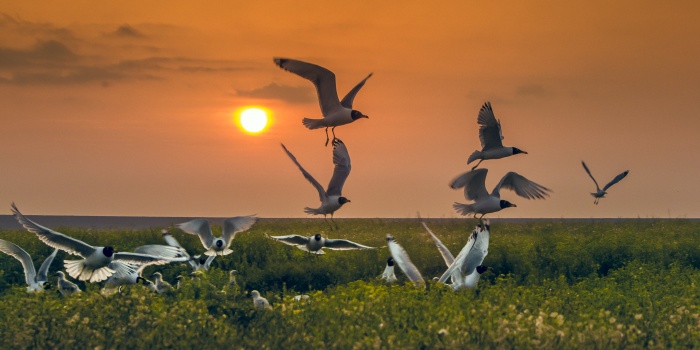 “But humans are social animals,” notes the youngest protagonist, Pavlo, finally. In two years, the filmmaker’s camera finds the young researcher, who used to help tiny bird chicks climb out of their eggs with his tender hands, in Kyiv doing manual labour with a shovel in his hand. The isolation of the world of Askania, its timelessness, turn out to be as fragile as the eggshell when they face this all-too-human question: What happens tomorrow? The hands of the clock, different prospects force the young man to choose between his favourite profession and mundane work, while his colleague is forced to sell bright peacock feathers.

In the end, the bustle of the city, the fleeting moments which merge into the dense humming of space-time, are reflected in Roman Bordun’s documentary The Diviners. Formally the film consists of the director’s daily video journal entries which he makes in Kyiv, Lviv and Odesa during different seasons. Political arguments between neighbours on a bench near an apartment building entrance; a night-time visit to a friend in a dormitory; a walk with his beloved girlfriend; a neighbour in a train’s sleeping car who tries to stuff a bunch of big plastic bottles into the luggage compartment; a careless brute who parked in the middle of streetcar rails; a strange woman on a balcony; a random company of drunks in the midst of a summer night in Odesa; the silky hair of his beloved woman who is still sleeping next to him in the morning; a nude beach; a taxi driver who is also a photographer; trains; minibuses; messages from the sad girlfriend; buildings; passers-by; steps… This kaleidoscope of momentary video recordings adds up to a single frantic flow of time where you cannot get rid of the feeling that something is being lost. Something is not done in time, something slips out from everyday life and then lingers, like a big mystery, above life itself.